Despite the recent tensions based on the elections in Haiti, cholera continues to ravage many.  A solution in the form of an oral vaccine can provide hope, but the vaccine’s manufacturer (Shantha Biotechnics, a Sanofi company) has decreased production in 2015 after promising to the do the opposite.

Ignoring the plight of the poor in Haiti 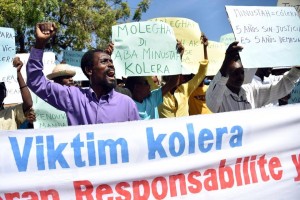 As Haitians take to the streets to protest the results of their recent presidential election, a quieter but more deadly battle continues throughout the country against the world’s largest cholera outbreak.

The toll is enormous, particularly for the poor. Although cholera is entirely preventable and completely treatable, five years after the disease appeared in Haiti for the first time in recorded history, 9,041 deaths have been registered, and more than 750,000 have been sickened in its grip. The real numbers are likely much higher.

By its nature, the disease is an inequitable attacker, a disease of poverty — it tends to strike hardest where access to toilets is limited or nonexistent, and where clean water is beyond financial reach. In the absence of public water systems, for many of Haiti’s poorest people, buying water purification tablets can only be done at the expense of buying food, or soap, or medicine, or school supplies. These are impossible choices. But unfortunately attention has waned to the point where progress has stalled, with devastating consequences. In 2014, more cases of cholera per population were registered in Haiti than in any other country reporting to the World Health Organization.