Candidates trailing in polls have all claimed voter fraud. Candidates and followers of the trailing parties are contesting the results by way of demonstrations, press conferences, declarations, letters, and legal contests. 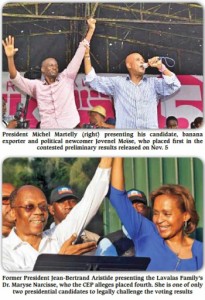 Other than Jovenel Moïse of the ruling Haitian Bald Headed Party (PHTK), almost all of the other 53 Haitian presidential candidates reject the Oct. 25 election’s preliminary results announced by the Provisional Electoral Council (CEP) on Nov. 5.

However, the candidates’ tactics for redressing what many observers also say are fraudulent and non-transparent vote counts differ widely. The result is a disjointed array of demonstrations, press conferences, declarations, letters, and legal contests which appear, until now, to leave the CEP, as well as the regime of President Michel Martelly and his backers in Washington, unmoved and unalarmed.