On December 15, the caneworkers’ union (Syndicat des Coupeurs de Canne) protested against the mishandling of their documentation applications to the Haitian consulate in DR. 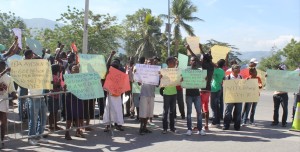 Some 40,000 sugarcane workers in the Dominican Republic (DR) are facing the problem of obtaining valid Haitian identity documents to be able to secure their permits to work in the DR (the DR government is not trying to kick them out). 4,806 people are members of this union, and have each payed (along with, likely, most of the remaining 35000 or so) 1000 pesos to the Haitian consulate to obtain proper documentation. The ambassador Surprise Daniel insists that the money was not received and he knows nothing of the outstanding applications. He was recalled to Haiti during this process. Mario Joseph (BAI’s Managing Attorney) and the syndicat reps met with Evans Paul (Haiti’s Prime Minister), regarding opening an inquiry with the Haitian government, and the Prime Minister responded that he is aware of the case, and will personally follow it through deploying members of his cabinet to ensure that 1) the money is located and the responsible persons identified and sanctioned, and 2) that the workers are issued documentation.

Mario Joseph and BAI will continue this case to make sure that the Prime Minister’s promises are fulfilled.