Haitian elections to be postponed due to continued disputed election results

Due to multiple reports of ballot stuffing and vote rigging, the presidential and legislative elections have been postponed. An alternative date will be provided once Oct. 25th vote has been re-evaluated. 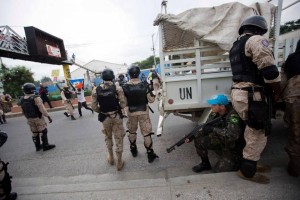 Part of the article is below.  Please click HERE for the full text.

Elections officials made the announcement late Monday in a communiqué, just hours after the spokesman for the nine-member council, known as the CEP, told journalists that the body was ready to hold the vote. Also postponed were parliamentary runoffs and local elections, which were to take place on Dec. 27.

No alternative date was provided. Instead, officials noted that the runoff is pending the report of an electoral commission charged with evaluating the Oct. 25 presidential vote. Local electoral observer and presidential candidates, including Célestin, allege that the elections was marred by vote rigging and ballot stuffing.