Haiti looks to future for new ways of monitoring votes

Calls for a recount on the first round of the Haitian elections are now stemming from US-based diaspora organizations. The idea of a potential verification of votes worries the international community as they think it might jeopardize the presidential run-off. 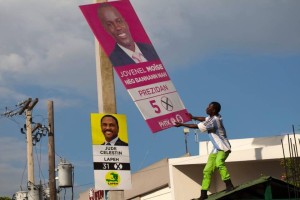 The ink on his thumbnail was supposed to be a fraud-proof deterrent, a sign that he had already voted in Haiti’s critical presidential and legislative elections.

But hours after the adviser to Haiti’s Provisional Electoral Council cast his ballot in the now disputed Oct. 25 vote, the indelible ink stain was barely visible, more resembling a fading birthmark than an electoral safeguard.

Nearly two months after the pivotal balloting and three weeks before the scheduled Dec. 27 presidential runoff, Haiti remains at an impasse. Allegations of ballot tampering, fraudulent tabulations and widespread procedural breakdowns — such as failing ink that led to multiple voting — have fanned a widening chorus of doubt about the credibility of the results.