In anticipation of the December 27th runoff, violence has been reported throughout the country.  Further review shows that violence stems not just from discontent with the presidential elections. 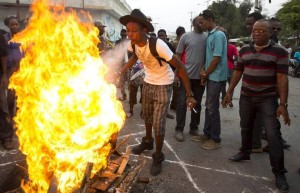 The publication of final legislative results by Haiti’s Provisional Electoral Council — over the objections of the country’s Senate — triggered violent protests and acts of vandalism in several Haitian cities.

Unrest was reported in at least five of the country’s departments — the North, Northwest, Southwest, Southeast and West. Elections offices and homes were set on fire, rocks were thrown and tires were left burning.

By Saturday afternoon, there was a tenuous calm in some areas, but other communities were still reporting blocked roads.

In the southwest city of Les Cayes, roads were blocked and windows of passing vehicles were broken by people throwing rocks, said former Sen. Francky Exius, who lost his bid to return to the Senate. Exius confirmed the information on the popular Saturday political program Ranmase.