BAI’s Mario Joseph’s analysis of the U.S.’s involvement in Haitians elections since 2011.   With the run off on the horizon, Haiti’s faces a similar fate, another U.S.-backed president with a weak democratic mandate.

Will Washington Greenlight Another Coup in Haiti? 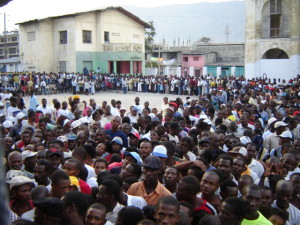 In October, Haitians went to the polls in a critical election for nearly 5,000 political positions, including the presidency. The preliminary results named Jovenèl Moïse, a member of outgoing President Michel Martelly’s party, as the frontrunner — though by a small enough margin that a runoff vote is planned for December 27th.

Unfortunately, evidence of overwhelming fraud discredits these results. If the putsch is successful, Haiti could have yet another U.S.-backed president with a weak democratic mandate.

The United States has a long legacy of destructive intervention in Haiti — whether through direct military occupation, support for heinous dictators, facilitation of coups d’état, or manipulation of the electoral process.

Link to the original article HERE.