Campaigning for the 2nd round of Haiti’s presidential elections has already started; despite the runner up to the first round claiming he will not be participating. Celestin refuses to campaign or run until an independent electoral commission follows up on the previous round which had him finishing 2nd. 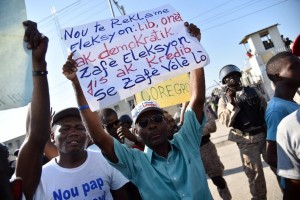 Port-au-Prince (AFP) – Campaigning for the second round of Haiti’s presidential election opened Friday, with the opposition candidate refusing to participate without sweeping reforms to the process.

Haiti, the poorest nation in the Americas, has endured years of political crisis aggravated by its attempt to recover from the massive January 2010 earthquake that claimed some 200,000 lives.

Candidate Jude Celestin “will not launch his campaign and will not participate in the January 24 voting” until recommendations that an independent electoral commission presented earlier are fully implemented, his campaign spokesman Augustin Jinaud told AFP.