Fighting for Justice Through Unjust Systems

The Saturday afternoon presentation on the human rights report at the Bureau des Avocats Internationaux did not proceed as planned.

The plan was for Meena Jagannath to do a training for the representatives from Haitian civil society groups on the Universal Periodic Review (UPR). After that, they were to break up into smaller groups to discuss individual topics further.

That was the plan. 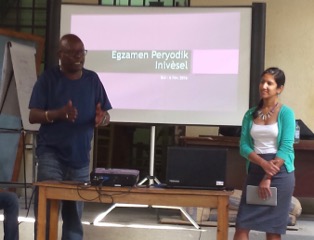 It started off right on schedule. Mario Joseph, managing attorney of the BAI, introduced Meena, who is now with the Community Justice Project in Miami, but had previously worked for the BAI – importantly, at the time the last UPR was done in 2011. The previous day, she had done a similar training with BAI’s lawyers and grassroots groups.

Mario put the pressure on Meena immediately by telling Saturday’s participants that she spoke Kreyol like a rat. This, believe it or not, is pretty much the highest praise one can get – especially coming from Mario. (The basic idea, a friend explained to me once, is that speaking like a rat means that the words scurry off your tongue like a rat scurries – or something like that. It has only ever been said jokingly when referring to the way I speak Kreyol.)

Meena, in all seriousness, really does speak Kreyol like a rat. And so she explained to the participants – backed up by a PowerPoint presentation also in Kreyol – just what the UPR is.

Essentially: Every five years, each country’s human rights record is reviewed by the UN’s Human Rights Council in Geneva. Governments can submit reports about what they’ve done to protect human rights. But if, as in the case of Haiti’s government, there is more in the way of abuse of human rights than protection, it’s unlikely the government’s story will match up closely with reality.

But governments are not the only ones who can submit information so the lawyers at the BAI will submit a report as well. They hope to gather information – and recommended solutions – from the civil society groups on topics including political, social, and economic rights as well as gender discrimination and access to justice for victims of gender based violence; LGBT rights; and the situation of the refugees from the Dominican Republic.

As Meena briefly went over the topics, her voice had to compete with the chanting and music of an elections protest going down nearby John Brown Avenue. It was the day before President Michel Martelly was to step down — after five years of constitutional abuses had led to a genuine constitutional crisis. There was no elected president to take over from him because years of no elections were followed by deeply fraudulent ones – fully supported by the US — in 2015.

Tens of thousands of people have been protesting in the streets and, most disturbingly, the day before the presentation, former army soldiers – or perhaps those who just identified with them – showed up in the streets, brandishing weapons. The UN peacekeeping troops and Haitian National Police pretty much let them have their way.

It is a decided understatement to say the situation surrounding the participants in the UPR group was dicey and the sounds of the protest were a reminder of that. But that’s not why the presentation did not go as planned. Some cocked their heads to listen to the protest, most leaned in to listen to Meena.

A few minutes later, there was the sound of what I’m pretty sure were three or four gunshots in the distance. (I say pretty sure, because I have been blessed by a life where I have not heard a lot of gunfire.)

But that’s also not why the presentation didn’t go as planned either. At most, a few people raised an eyebrow at the sound.

No, the presentation took a different path at the point in the program when they were going to break up into smaller groups to start work on the different topics.

Instead, there was a respectful debate over whether they should engage in this work at all.

There is the cholera epidemic sparked in October 2010 by negligent waste disposal at a UN base that contaminated Haiti’s main water system. In the years since, while the UN has stonewalled and evaded responsibility at every turn, more than 750,000 people have been sickened by the disease and more than 9,000 have died.

There are the cases of sexual abuse, exploitation and rape by UN troops and staff in Haiti – which have largely gone unpunished as well.

There is the propping up of corrupt regimes, like Martelly’s, since the UN “peacekeeping” mission began in 2004, after the coup against Jean-Bertrand Aristide.

Instead of spending the billions of dollars on needed water and sanitation infrastructure, making sure all Haitian kids have access to a good education, and true human rights enforcement, the UN has opted to spend it on “security” in Haiti. Security for who? Not for the people gathered at the BAI that day.

So, why, some asked, should they even give any credence to such an institution by engaging in its process as if the UN was the paragon of human rights enforcement which it clearly is not?

Yet another reason why I wish I spoke Kreyol like a rat is that while I got the jist and the spirit of the debate I did not always catch the eloquence and wit of the words.

Likewise, with the answers as to why engage with the UN – given by Mario Joseph and others – I can’t tell you the exact words. But, as I listened to the debate, I was reminded of something I heard Joseph say in a video made shortly after the earthquake called “A Soapbox in Haiti.” He was describing why the BAI fought for justice for the victims of the Raboteau Massacre, despite having only a deeply dysfunctional and corrupt Haitian justice system to work with:

“We did not work on the case because we thought the system was good, but as if it were good.”

The presentation on the human rights report did not go exactly as planned because thoughtful debate and careful listening take time that cannot always be scheduled.

The participants planned to come back the following week to offer expertise on the human rights situation and their ideas for solutions to the problems they face. It’s not work that can be done in an afternoon, especially when evidence of the active opposition to their struggle could be found all around them.

But they are in this for the long haul; something that was brought home to me at the end of the meeting. The man sitting next to me had been holding a small white paperback book in his lap. When he got up to go, I saw the cover: It was the 1987 Haitian Constitution, created after the fall of the Duvaliers when the latest long struggle for democracy and freedom began.