State Department vs. “Will of the Haitian People” in Haiti’s Elections

There were two press conferences the day before the protest on Feb. 18 against foreign interference in Haiti’s elections and democracy.

One was held in person at the Bureau des Avocats Internationaux in Port-au-Prince, the other by teleconference by the US State Department.

At the BAI press conference, Mario Joseph told about 30 Haitian journalists how the foreign occupation of Haiti and the obstruction of a truly inclusive democracy had brought poverty and hunger to the country. David Oxygene of MOLEGHAF, a Haitian pro-democracy group, condemned the “neoliberal transition” and said that because of the foreign occupation of the country, Haiti has a history of slavery and sharecropping, of cholera and coups d’etat. 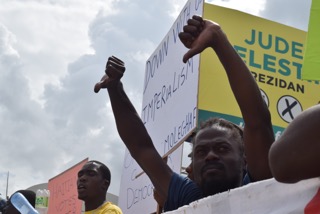 Both Joseph and Oxygene said the foreign interference in their country’s democracy must end and so there would be another protest the following day, the fourth one this year, at the US Embassy in Port-au-Prince.

The same day as the press conference at BAI, Kenneth Merten, the US State Department’s special coordinator for Haiti, told a different story.

“As one of Haiti’s many international partners, the role of the U.S. is to support and strengthen democracy in Haiti,” Merten told reporters at his Feb. 17 teleconference. “And we’ve been active in doing that in many different ways for over 30 years.”

Merten stressed, repeatedly, that the US wanted elections and democracy in Haiti that reflect “the will of the Haitian people.”

But, when a reporter asked him about the possibility that Haitians might choose presidential candidates other than the two who were selected after the Oct. 25 election that was marred by massive fraud, Merten demurred. No, no, that was not his understanding of how things should go.  No, no, that wouldn’t do at all. “I don’t think there is any expectation that the election will be opened up to more candidates.”

Will of the Haitian people and all that, as long as it’s the will of the US State Department – which is why Merten, in his own way, was also explaining why there would be another protest at the US Embassy in Port-au-Prince against foreign interference in Haiti’s elections and democracy.

On the day of the protest, the people inside the US Embassy in Port-au-Prince were protected by a line of police in riot gear who had nothing to do but stand there and be hot because they were facing off against peaceful, unarmed protesters, most wearing jeans and T-shirts.

The people inside the US Embassy might not have understood the chants of the protesters because they were in Kreyòl, but they could read the signs in English: Down with Imperialism. Hands Off Our Democracy. Haitian Votes Matter.

They will be seeing those signs again. 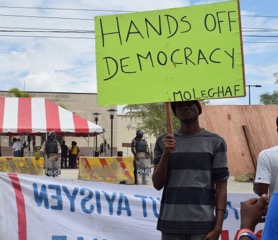