In a special report sent to Ban Ki-Moon in October 2015, five UN human rights experts denounced the secretary general of the UN for denying UN responsibility and the unwillingness of the Organization to review claims by those affected by the disease. This report by the UN’s own experts clearly demands justice for those affected by the outbreak of the disease. The report is reemerging because of the recent appeal by IJDH against the UN in a Manhattan federal court. 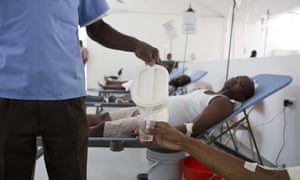 The secretary general of the United Nations, Ban Ki-moon, has been chastised by five of the UN’s own human rights experts who accuse him of undermining the world body’s credibility and reputation by denying responsibility for the devastating outbreak of cholera in Haiti.

In a withering letter to the UN chief, the five special rapporteurs say that his refusal to allow cholera victims any effective remedy for their suffering has stripped thousands of Haitians of their fundamental right to justice. The letter is believed to be the first time that the UN’s guardians of human rights have turned their spotlight onto the UN hierarchy itself, as opposed to individual nation states that are the usual target of their criticism.

The five experts tear apart the secretary-general’s insistence that the UN is immune from any obligation to compensate victims despite overwhelming evidence that UN troops brought cholera to Haiti five years ago from an infected area of Nepal. Such an approach, the rapporteurs write, “undermines the reputation of the United Nations, calls into question the ethical framework within which its peace-keeping forces operate, and challenges the credibility of the organization as an entity that respects human rights”.

Haiti’s cholera epidemic erupted in October 2010, nine months after the earthquake that ravaged the capital Port-au-Prince killing about 220,000 people and leaving more than 2 million homeless. It was the first known appearance of the disease in the country for at least 150 years.

Latest figures suggest that some 9,202 people have died from the disease, with a further 769,080 treated in hospital since the outbreak began.

A panel of independent experts commissioned by Ban himself traced the source of the outbreak to the Meille river which it found to have been contaminated with the Asian strain of cholera as a result of human waste being dumped straight into the tributary. In 2013 the same panel concluded by a “preponderance of the evidence” that the carriers were UN peacekeepers from Nepal billeted in the Mirebalais barracks close to the river.

Lawsuits brought against the UN on behalf of victims have alleged that the UN troops had been based in an area of Nepal that has endemic cholera yet were not properly screened for the disease before being relocated to Haiti for post-earthquake duties. Sanitation arrangements at the base were grossly inadequate, leading to the disposal of feces into a river that is widely used by thousands of Haitians for drinking, bathing, washing clothes and irrigation.

The letter from the five special rapporteurs was sent to the UN secretary general in October but has only now been made public in a report issued by the office of the high commissioner on human rights. The experts are responsible for investigating human rights records in Haiti, as well as safe drinking water and sanitation, poverty, physical and mental health and housing.

They said that the world body’s denial of responsibility for the catastrophe was difficult to reconcile “with the UN’s commitment to promote and encourage respect for human rights”.

Several lawsuits have been brought on behalf of Haitian victims of the outbreak in an attempt to force the international organization to rethink its approach. A class action lawsuit that is currently being heard by the federal district court for the southern district of New York accuses the UN of recklessly failing to avoid the spread of the disease.

Beatrice Lindstrom, a staff attorney with the Institute for Justice & Democracy in Haiti who is lead counsel for the plaintiffs on the lawsuit, said the handling of the crisis was “a huge stain on the credibility and moral conscience of the UN, an organization founded on promoting human rights and equality around the world.”

Lindstrom added that the special rapporteurs’ letter showed that concern about the secretary general’s unbending position was rising up to senior levels within the UN system. “People are no longer prepared to stand by and watch this play out.”

The UN is protected under international agreements with a wide immunity against prosecution within the domestic courts of nation states. However, international conventions also stipulate that the organization must make provision for the appropriate settlement of disputes where the UN is accused of causing damage to private interests or individuals.

In the case of Haiti, UN lawyers leant on a previously unused get-out clause by arguing it was not responsible for any such settlement because a review of any of the cholera claims would force a consideration of “political and policy matters”. In a letter issued to the special rapporteurs by UN chiefs in November 2014, they argued that “claims based on political or policy-related grievances” were excluded from any obligation on the body to provide a settlement to disputes.

But the special rapporteurs said they were mystified by such legalistic obfuscations. “The result of this approach is that five years after the outbreak of the disease in 2010, victims have effectively been denied access to a body that is competent to hear their case and decide on its merits.”