UN Could Have Prevented Haiti Cholera for Under $2000

Researchers from Yale Schools of Law and Public Health have found that for a total of under $2,000, the United Nations could have prevented the cholera epidemic that has killed at least 9,000 people in Haiti. The simple prevention measures include antibiotics, vaccines, and a screening test. Now that cholera has been rampant for five and a half years, it will cost over $2 billion to eradicate. If matters can get any worse, the UN still hasn’t implemented these preventive measures when deploying troops from regions where cholera is endemic. This means that there’s a very real potential for UN peacekeepers to spark another deadly cholera epidemic somewhere else in the world.

Researchers find screening tests and antibiotics could have warded off illness, which has taken thousands of lives and will cost more than $2bn to eradicate 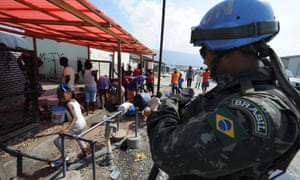 The devastating Haiti cholera epidemic that has claimed thousands of lives and will cost more than $2bn to eradicate could have been prevented if the United Nations had used a basic health kit for a total of less than $2,000, scientists have found.

A team of Yale epidemiologists and lawyers has looked at how the cholera bacterium was introduced to Haiti by United Nations peacekeepers relocated there in the aftermath of its 2010 earthquake. Yale’s startling finding is that simple screening tests costing $2.54 each, combined with preventive antibiotics at less than $1 per peacekeeper, could have avoided one of the worst outbreaks of the deadly disease in modern history.

The Yale experts warn that the catastrophe in Haiti could be repeated as the UN appears to have failed to learn the lessons of its lack of preventive screening of peacekeepers. Some 150,000 UN peacekeepers are deployed from cholera-endemic countries each year but there is still no routine procedure to ensure they are free of the infection before being moved.

At least 9,000 Haitians, and possibly many more, have died in the continuing cholera epidemic that erupted in October 2010, it is thought as a result of untreated sewage from UN peacekeeping camps being dumped straight into a river. It was the first outbreak of the disease in Haiti in 150 years, and was almost certainly caused by the relocation of UN peacekeepers from Nepal, where cholera is present, to Haiti for emergency earthquake assistance.

In a study published in the open-access research website PLOS, the team from Yale’s school of public health and law school looked at a variety of interventions that could have been used to counteract any infection before the UN peacekeepers were brought from Nepal to Haiti. By its reckoning, the epidemic could have been prevented for less than $2,000 – a tiny drop of the $2.2bn that estimates suggest must be spent over the next decade before the disease is eradicated.

Administering a basic screening test using rectal swabs together with antibiotics and vaccination could have reduced the probability of an outbreak by 98%, the epidemiologists concluded.

“Screening and prophylaxis are inexpensive, in addition to being among the most effective options at our disposal. The costs of implementing these strategies in the future are negligible when compared against the economic and social costs cholera has inflicted upon Haiti,” said Joseph Lewnard, the lead author of the Yale study.

The participants in the Yale study fear that another disaster on the scale of Haiti’s is potentially waiting to happen, as the UN has still not adopted screening and preventive antibiotics as routine treatments in relocating peacekeepers. The world body does vaccinate its troops, but the researchers found that vaccines alone have a much lower efficiency rate in counteracting the cholera bacterium.

“We can’t predict the future, but unless UN policy changes, the conditions for sparking another cholera epidemic still exist,” said Virginia Pitzer, a senior author of the Yale study. “Our research suggests that screening and/or prophylaxis of peacekeepers are the most effective ways of preventing the inadvertent spread of cholera, but the UN has yet to implement either of these policies. Nor have they been transparent about the reasons why they are reluctant to do so.”

In a statement to the Guardian, the UN said that it followed the recommendations of the World Health Organization’s global taskforce on cholera control in terms of prevention involving the deployment of its civilian, police and military staff.

“The secretary general and the organization remain committed to do all that can be done, with the government of Haiti and the international community, to help overcome the spread of cholera. Progress has been made already in combating the disease in the short term and we do our utmost to rally the resources necessary to support the government’s longer term efforts to eliminate the disease and improve water and sanitation in the country.”

Over the past few years the UN has consistently refused to accept responsibility for compensating the victims of the epidemic and their families, and is being sued by thousands of Haitians. Yet earlier this month, the Guardian disclosed a leaked report that had been drawn up by the UN’s own experts a month after the cholera outbreak that found alarming sanitation problems on the peacekeeping bases of the UN stabilisation mission in Haiti (Minustah).