Exposing the Cause of Cholera in Haiti

Dr. Renaud Piarroux looked into exposing the true cause behind the cholera outbreak in Haiti. There had been rumours that the disease was brought over by Nepalese peacekeepers, but Piarroux’s investigations were to confirm if this was really the case. Piarroux was suspicious because UN agencies seemed uninterested in finding the cause of the outbreak. In fact, both US and UN authorities both tried to attribute the spread of cholera to bacteria that already existed in the environment. Before leaving Haiti, Piarroux received a secret document from the Haitian Ministry of Public Health and Population that confirmed the source of outbreak as the Nepali MINUSTAH camp. Officials had known all this time and yet, tried to cover-up the wrongdoing. As article author Crawford Killian’s words, “they sacrificed Haiti simply to escape political embarrassment”. 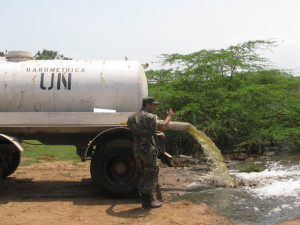 In October 2010, Dr. Renaud Piarroux, a French epidemiologist, was invited by the government of Haiti to investigate the unexpected appearance of cholera in towns and villages along the Artibonite River, the country’s largest. Piarroux had extensive cholera experience, notably with a serious outbreak in the Democratic Republic of Congo.

The outbreak had startled everyone: cholera had never been known in Haiti before, and within days of its first known case on Oct. 14, it had infected thousands and killed scores.

Like any good epidemiologist, Piarroux knew that finding the source of an epidemic is critical — especially in a country as poor as Haiti, which had scarcely recovered from the earthquake of January 2010 that had killed a couple hundred thousand people. (The death toll has been a subject of controversy.)

His search — and shocking discoveries — are at the centre of Deadly River: Cholera and Cover-Up in Post-Earthquake Haiti by Ralph R. Frerichs.

Rumours blamed sewage from a camp of Nepali peacekeepers. Jonathan Katz, an American journalist, had documented those suspicions, but they were far from proven. The United Nations peacekeeping force, known as MINUSTAH, had been installed in Haiti after the 2004 ouster of democratically elected president Jean-Bertrand Aristide. But instead of keeping hostile armed forces from attacking one another, the peacekeepers were a kind of heavy-handed police force.