158 outraged members of Congress signed on to a letter sent Mr. John Kerry by Representatives John Conyers, Jr. and Mia Love. The Congressmen and women sent the letter to Mr. Kerry with the hopes of getting him to put pressure on the United Nations, for a response to the Cholera epidemic that has invaded Haiti for the past 6 years. The disease has affected over 800,000 people and has killed roughly 10,000. Research has shown that disease came from the U.N. Peacekeeping mission that was sent to Haiti after the earthquake; however, the U.N. has refused to admit its involvement and has deemed the victims’ lawsuits to be invalid. What makes this letter so powerful is the tremendous bipartisan support. Although mostly supported by Democrats, Republicans have joined the cause to demonstrate that the U.N.’s behavior has been unacceptable. 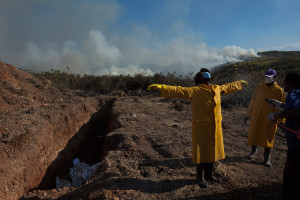 Angry over a six-year cholera epidemic in Haiti traced to infected United Nations peacekeepers, 158 members of Congress asked Secretary of State John Kerry on Wednesday to pressure the United Nations for a more effective response, including reparations to victims.

By official estimates, the epidemic has killed roughly 10,000 people and sickened more than 800,000 in Haiti, the Western Hemisphere’s poorest country. Some research has suggested that the death toll could be far higher.

In a letter sent to Mr. Kerry by Representative John Conyers Jr., a Michigan Democrat who is the longest-serving House member, and Representative Mia Love, a Utah Republican, the lawmakers expressed exasperation with what they described as the United Nations’ failure to “comply with its legal and moral obligations to provide cholera victims with access to an effective remedy.”

While most of the signers were Democrats, the letter was extraordinary partly because of its bipartisanship in a climate of polarized politics in Washington.

Cholera, an infection that spreads through water contaminated by human waste, had been absent in Haiti for a century until the arrival of a United Nations peacekeeping force in 2010 after the country’s devastating earthquake. Medical studies have shown that the disease was reintroduced via infected members of the peacekeeping contingent and their faulty sanitation practices, which leached latrine sewage into the water supply.

While the United Nations has helped in the effort to combat the epidemic, it has not acknowledged any responsibility for causing it or provided a way for victims to seek compensation. It has also refused to recognize the validity of lawsuits by victims, arguing that diplomatic treaties insulate the United Nations from such actions.

Lawyers for the victims have filed at least three suits in the United States, the host country of the United Nations, which Justice Department lawyers have argued are invalid. But in March, a federal appeals panel in New Yorkagreed to consider whether one of those lawsuits can proceed. The panel’s decision has not been announced yet.

“The U.N. continues to refuse to even discuss providing compensation for the losses incurred by those killed and sickened by the cholera it brought to Haiti, and there is no notable progress in its proclaimed efforts to provide the water and sanitation infrastructure necessary to control the cholera epidemic,” the congressional letter to Mr. Kerry said.

It urged the State Department “to immediately and unreservedly exercise its leadership to ensure that the United Nations take concrete steps to eliminate the cholera epidemic.”

Officials at the State Department and the United Nations did not immediately comment.

Mr. Conyers said in a statement that the cholera epidemic was “a darkening stain on the world’s conscience” and was damaging the United Nations’ credibility.

“The U.S. government cannot watch this crisis unfold from the sidelines,” he said. “We need to exercise our leadership to make sure that cholera is eliminated and that the U.N. provides due process and remedies to the victims.”

Ms. Love, citing the role of the United States as the largest financial supporter of the United Nations, said, “It is critical that we use our influence to ensure the U.N. takes responsibility for this outbreak and works to protect the people of Haiti.”

Advocates for cholera victims said they were encouraged by the letter, which they said sent a strong message.

“This letter is a remarkable showing of bipartisanship and consensus that the U.N.’s stonewalling on cholera accountability, and the U.S. government’s acquiescence to it, are unacceptable,” said Brian Concannon Jr., director of the Institute for Justice and Democracy in Haiti, a Boston-based legal advocacy group.