Concern from E.U. and U.S. Over Election Rerun

Both the E.U. and the U.S. have expressed concern with the decision of Haiti’s Provisional Electoral Council to rerun the country’s presidential elections, while the OAS has supported it. In reaction to the decision, the E.U. closed its observer mission in Haiti, while the U.S. State Department announced its “regret” that the election will be prolonged even further. How the reactions of the E.U. and U.S. will affect the funding for the elections remains uncertain, but the OAS has pledged to continue to play a “positive role in the electoral process”.

Part of the article is below, click HERE for the full text. 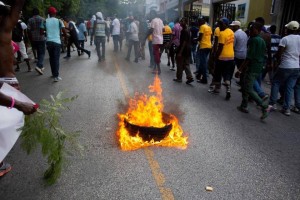 Haiti’s decision to rerun its disputed first-round presidential vote continued to ripple through the international community Wednesday as the European Union and the United States criticized the move, and the Organization of American States announced its continued support for the process.

All three donors had contributed to last year’s $100 million elections price tag and had praised the Oct. 25 presidential vote that pitted government-backed candidate Jovenel Moïse against Jude Célestin of the opposition.

“Despite a certain number of flaws and irregularities that were observed, they were not however of the nature to alter the results,” the EU’s Electoral Observer Mission said as it announced the closure of the mission while attacking the findings of the special verification commission.

The commission audited 25 percent of the roughly 13,000 tally sheets from polling stations, and found among problems, that there were 628,000 untraceable or “Zombie” votes.