The New York Times Editorial Board criticizes the UN along with the international community in failing to provide an appropriate response to the cholera epidemic in Haiti. The UN has yet to acknowledge its role in the outbreak which began with poor sanitation by UN Peacekeepers. The disease has already killed roughly 10,000 Haitian people and there are no sufficient mechanisms to prevent continued diagnoses.

The Cholera Epidemic the U.N. Left Behind in Haiti

The Editorial Board, The New York Times 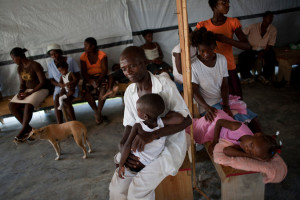 As Haitians were reeling from the devastating Jan. 12, 2010, earthquake, United Nations peacekeepers inadvertently compounded their troubles by bringing cholera to the island. Roughly 10,000 Haitians have died from the disease, which spreads easily in places with poor sanitation.

The United Nations hasn’t acknowledged its responsibility and has vigorously fought legal efforts to secure compensation for victims. This is reminiscent of its slow response to allegations that peacekeepers in Africa had sexually abused scores of minors.

Last week, a bipartisan group of 158 members of Congress urged Secretary of State John Kerry to put pressure on the United Nations to mount an effective response against cholera and to compensate people who have been affected. “Each day that passes without an appropriate U.N. response is a tragedy for Haitian cholera victims and a stain on the U.N.’s reputation,” the lawmakers wrote.

Unless there is a dramatic change in approach, the epidemic will damage the legacy of Secretary General Ban Ki-moon, who will leave his post at the end of the year. There are basic steps he can take before then.

For starters, the international community needs to redouble efforts to fight this preventable and curable disease. In 2012, the United Nations set out to rid Haiti and its neighbor the Dominican Republic of cholera, by expanding access to clean water and improving Haiti’s beleaguered health care system. The initiative has been inadequate and underfunded, and cholera continues to sicken people.

Beyond that, the United Nations must acknowledge its role in the epidemic. Only by doing that will it be able to establish stronger safeguards for future peacekeeping operations. Experts believe that Nepalese peacekeepers in camps with poor sanitation introduced cholera to Haiti. That raised questions about health screening for peacekeepers and the sanitation standards they use.

Finally, Mr. Ban should heed the organization’s watchdogs who urged him last year to establish a system to compensate victims. “The United Nations has a particular responsibility to ensure that a very large number of victims are not left without any effective remedy for human rights violations that result from actions of forces operating under the authority of the United Nations,” they said. It’s not too late for Mr. Ban to take those words to heart.