A bipartisan letter from 158 members of Congress asking the US State Department to demand UN accountability and remedy for the cholera epidemic has been sent to Secretary of State John Kerry. It was circulated by Representatives Mia Love and John Conyers and is intended to change the status quo of the UN’s disposition in Haiti regarding the outbreak. 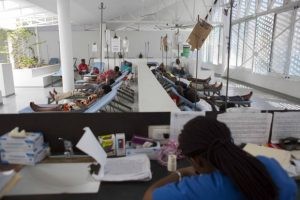 Two Black lawmakers are leading a bipartisan push for the U.S. State Department to “immediately and unreservedly exercise its leadership” to ensure the United Nations takes responsibility for a devastating cholera epidemic caused by the improper disposal of sewage by UN peacekeepers.

According to the letter addressed to Secretary of State John Kerry and signed by 158 members of the U.S. House of Representative, an internal UN memo revealed that since 2010, several bases of the UN’s Haiti mission, MINUSTAH have been releasing untreated waste into the Caribbean nation’s environment. The resulting cholera outbreak has killed between 10,000-100,000 people and sickened at least 800,000 in the last five years, making it the “worst cholera epidemic of modern times,” according to the letter.