Following the brutal killings, Haitian civil society has come together to demand action. Activists have called for the inclusion of women with disabilities into the national gender equality plan in an attempt to remedy the causes of this event. IJDH Staff Attorney Nicole Phillips is also cited in this article. 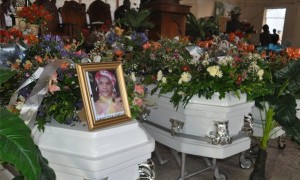 On Saturday 11 June government ministers and campaigners attended the funeral of three female street vendors, laid to rest in sturdy white coffins laden with flowers, with more than 2,000 people in attendance. Their brutal murders had shocked a country.

Jesula Gelin, a mother of six, Vanessa Previl and Monique Vincent were all deaf and worked in Haiti’s capital. That is itself was notable – they were economically independent and lived away from their families in a deaf community in Leveque, a village about an hour from the city.

On 18 March they had spent the morning in Port-au-Prince buying business supplies and visiting their families. They set off home in the early afternoon, leaving plenty of time to get back before dark on a normal day. However, a bridge had collapsed on Route Nine, one of the main thoroughfares, bringing traffic to a standstill. “It was on the radio, TV, so everybody knew to avoid those areas,” says Nicole Phillips, a lawyer who is representing the women’s families. “But if you’re deaf, you’re not going to benefit from any of that. They had no idea that the bridge had collapsed.”

The women had been travelling on a tap tap – the privately run Jeeps that are the equivalent of buses in Haiti. But at some point, in the heavily congested traffic, they got off the tap tap to continue their journey on foot. “They got exhausted,” says Phillips. “And then late at night, we don’t know what time, they stopped off in one of the victim’s relative’s house.

The house was owned by a distant relative. “She had been there before, by car it’s just 20 minutes from where she lives,” says Phillips. “She and the two other ladies went there to spend the night.”

Reports of what happened next are from two women who have been arrested in connection with the triple murder. They lived at the house and say that when the three deaf women arrived they were frightened and thought that they were lougawou. In Haitian mythology, lougawou or lougarouare evil spirits who come out at night and cause mischief such as killing your goats or eating your dog. They are something to be feared. Disabled people are sometimes labelled bad spirits. “They think that they are a different creature of god,” says Phillips. “That helps them justify the stigma of disabled people. You can tell yourself this [that they are different] and feel more justified morally.”

The sequence of events is not entirely clear, but at some point between 8pm and midnight the women were tortured and brutally murdered. Phillips has seen photographs of the bodies with burn marks and machete cuts. The two women who were in the house and a male accomplice have been arrested in connection with the murder. But the police have not captured another main suspect, a distant relative of one of the victims.

The murders have brought a furious response from disability rights, women’s rights and human rights campaigners. “This has brought Haiti’s disability rights activists together,” says Phillips. “It has galvanised the community.” On 1 April hundreds of people marched in Port-au-Prince to demand justice for the three murdered women, and several other demonstrations around the country followed, including a march on 9 June in Cabaret near where they were killed.

Disabled people in Haiti are discriminated against in multiple ways. For example, only 5% of children with disabilities are in school, according to a report by the Haitian state submitted in the report to the UN Committee on the Rights of Persons with Disabilities. And people with disabilities complain that the police don’t take them seriously when they report crimes and that they are taunted in public as “cocobe” (useless).

And those activists are determined to seize this moment of tragedy and force the government to act. “We want to transform this very negative event into something positive,” says Pean. “Something which would ensure that people with disabilities are respected, and their rights are respected. Their right to education, their right to access to health, in other words, their right to live, with dignity.”

In response to the murders, campaigners are calling for the government to include the rights of women with disabilities into a national gender equality plan. The government has not replied to that petition yet, but it did fund the women’s funeral and ministers insist they are doing all they can to ensure that justice is done.

“For me, as a feminist activist,” says Nadine Anilus, a member of the Ministry of Women’s cabinet, “we condemn this criminal act and call the state authorities to take the necessary steps to make justice and reparation to the family of three women. Every Haitian citizen must play their part to improve the situation of people with disabilities. We are calling for a big national campaign.”

She adds that Haiti needs to ensure national accidents are communicated in a way that is accessible for people with disabilities and that more financial resources are needed for organisations working on these issues.

Pean is clear that it will take a long time before people with disabilities are treated equally in the country. “For things to actually change, mentalities as well, takes a long process,” he says. “One of the things that has to change is the economic situation in Haiti. Also, it’s essential that we have political stability. These are necessary conditions to enable us to reach true inclusion.”