Though the cholera brought to Haiti by UN peacekeepers continues to kill, there are fewer and fewer cholera treatment centers and funding to fight cholera is running out. Right after the epidemic began in 2010, there was a lot of funding but the UN has struggled for years to fund its cholera elimination plan. Now, a UN spokesman has promised a new approach and “material assistance and support” for Haiti’s cholera victims. IJDH’s Beatrice Lindstrom says “If the U.N. does present a robust response that responds to victims’ rights, it would make further litigation unnecessary.” 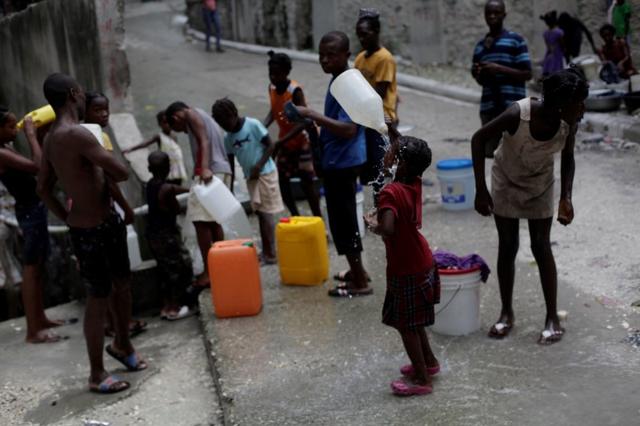 U.N.-led foreign funding has dried up for Haiti’s fight against cholera, thought to have been introduced by Nepali peacekeepers, triggering a surge of deaths this year even as the global body vowed to help overcome the epidemic.

The lack of support is notable because Haiti was free of cholera until 2010, when U.N. peacekeepers dumped infected sewage into a river, according to investigators.

Since then, more than 9,000 people have died of the disease that causes uncontrollable diarrhea and 800,000 people have fallen ill, mostly in the first two years of the outbreak.

The United Nations has not legally accepted responsibility for the outbreak. An independent panel appointed by Secretary-General Ban Ki-moon issued a 2011 report that did not determine conclusively how the cholera was introduced to Haiti.

However, a new report by the independent U.N. Special Rapporteur on Extreme Poverty and Human Rights that will be presented to the U.N. General Assembly later this year concluded that scientific evidence “now points overwhelmingly to the responsibility of the peacekeeping mission as the source of the outbreak.”

In August, Ban said the United Nations has a “moral responsibility” to help Haiti’s cholera victims and their families.

The outbreak and subsequent failure by the United Nations to help Haiti stamp out the disease will be a stain on the legacy of Ban, who steps down at the end of 2016 after serving two five-year terms that have been blighted by accusations of sexual abuse and exploitation by U.N. peacekeepers in the Central African Republic and elsewhere.

Ban, whose successor will be elected by the General Assembly, launched a major appeal aimed at eradicating cholera in Haiti four years ago.

But foreign governments largely ignored the plea and funding has almost halved to $7.9 million in 2016 from a year ago.

That has led to a reduction in prevention and treatment services, and 227 deaths in the first seven months of the year, a third more than a year earlier.

“These results are due to the reduction of funding available for cholera response projects,” the U.N. Office for the Coordination of Humanitarian Affairs (OCHA) said in a curt statement last week.

Because of the funding crunch, many charity teams that do street work to trace the source of local outbreaks wound down activities from April, treatment centers have been shuttered, and those still active complain of shortages of antibiotics.

In Carrefour, a working class district in the hills above Port-au-Prince, cholera is resurfacing at an alarming rate, aid group Solidarite International said, with 1,100 cases detected this year, and 220 of those in August alone.

An open cistern of grayish water serves as a spot for bathing, washing clothes and bottling drinking water in one square near Carrefour. Known as the Boyer Source, aid workers say the surrounding streets were high risk for cholera, with 16 cases in August.

“Every time it rains, this source becomes contaminated,” said Wangcos Laurore, head of the cholera response program at Solidarite International, looking over the grimy pond on a sweltering day last week.

Carrefour only has one cholera treatment center, after one shut last year. Here, four patients, all children, lay on camping beds. Zamar Marie Magdalah, a nurse, said capacity had been reduced from treating 60 cases at one time in previous years to 40 in June.

Now the limit is 15 patients. Those with conditions like high blood pressure and diabetes as well as cholera are turned away, because of the center lacks medicines to treat them.

“These are basic materials that we are supposed to have,” said Magdalah.

Nearby, Clerette Morenvil, the mother of a 10-year-old girl being treated at the center, showed members of a Solidarite International rapid response team a corner store whose owner sold her water from a spigot, where customers filled bottles for 1 Haitian gourde ($0.015) apiece.

“The water comes from a well,” said store owner Frantz Terin, to questions posed by the team.

“We don’t treat the water. We don’t have the authority to do so … we use it to wash our clothes. Me, I drink it. Everyone drinks it.”

Such emergency rapid-response teams, who visit the homes of cholera victims and their neighbors and trace the source of outbreaks, were scaled back by about 40 percent in April, according to UNICEF. Monthly support for the teams was cut by up to 50 percent in the first half of 2016, a government source said.

From January to July, nearly 25,000 cholera cases were registered, a 22 percent rise over the same period last year.

The world’s sympathy was with Haiti in the wake of the 2010 earthquake that killed more than 300,000 people and the response to the cholera epidemic was initially massive, helping rapidly reduce the number of deaths and infections.

But interest faded fast, with humanitarian crises such as Syria, Iraq, Yemen and South Sudan all competing for resources. Haiti’s lack of stable government and multiple failed elections may also have dulled donors’ funding appetite.

In 2012, Ban launched a $2.2 billion funding drive aimed at eradicating the disease from Haiti within a decade.

So far, the campaign has only raised 18 percent of the target from international donors, according to documents from the U.N. Office for the Coordination of Humanitarian Affairs.

“Despite repeated appeals, these efforts have been seriously underfunded and severe and persistent funding shortfalls remain,” Ban’s office said in August.

Of the top six donors who have contributed to the cholera response since the outbreak in 2010, only the EU’s European Civil Protection and Humanitarian Aid Operations and Canada have contributed significant funds this year. The United States, Sweden, the U.N’s CERF and OCHA’s emergency fund have not.

Ban has vowed a new approach, due to be unveiled in October. Given the lack of funds available for his first plan, it is not clear how he intends to finance a package that his spokesman said “would provide material assistance and support to those Haitians most directly affected by cholera” and address issues of water, sanitation and health systems in Haiti.

In 2011, rights group the Institute for Justice and Democracy filed a class action case against the United Nations over the epidemic, demanding it install a water and sanitation system in Haiti, compensation for victims and an apology.

The group, which recently lost a bid in a U.S. court to strip the U.N. of immunity from victims’ claims, said it would wait for Ban’s new plan before launching a Supreme Court appeal.

“If the U.N. does present a robust response that responds to victims’ rights, it would make further litigation unnecessary,” said Beatrice Lindstrom, a lawyer for the group.

(Additional reporting by Michelle Nichols at the United Nations and Lawrence Hurley in Washington; Editing by Frank Jack Daniel and Kieran Murray)