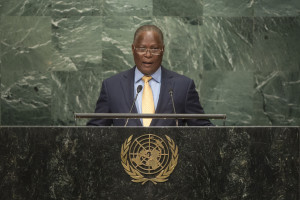 Friday morning, Provisional President of Haiti Jocelerme Privert addressed the 71st General Assembly of the United Nations. In his speech, he pledged the country’s support for the U.N.’s Sustainable Development Goals for 2030, stressed the importance of the U.N.’s efforts to address the global refugee crisis, and made the case that Haiti was ready for its October 9th elections despite financial, technical, and logistical problems. It was the final portion of his remarks, though, that victims of cholera introduced by U.N. peacekeepers were most pleased to hear:

“Over recent years, my country and people have suffered tremendously from waves of infectious diseases such as malaria, cholera, Zika, chikungunya, dengue, and I spare you more. In order to overcome these scourges, declarations of good intent, comforting though they are, are of no effect. We need real and effective support when it comes to drinking water systems, waste treatment, etc. The outbreak once again of cholera over recent months is one of the challenges which is most acute in Haiti. It is a clear illustration of the perceptible deterioration of the humanitarian situation, as was emphasized by the Secretary General in a recent report to the Security Council. Here, the government of the Republic of Haiti has noted and welcomes the statements of the Secretary General on two situations which have caused discomfort for the United Nations: the many cases of sexual abuse perpetrated by the blue helmets, and the introduction of cholera in Haiti. The recognition of the United Nations for its moral responsibility in this latter instance opens the way for real discussions regarding the obligation to definitively eliminate cholera in Haiti.  In this sense, we would like to hope that the urgent appeal of the Secretary-General in favor of the implementation of a substantially strengthened program of fighting cholera and assistance to victims and their families will be heard and will fully meet the expectations of the Haitian people.”

In the wake of Secretary General Ban Ki-moon’s historic statement, Privert has affirmed that the Haitian government stands with cholera victims in calling on the U.N. to truly fulfill its moral responsibility.

The audio of Privert’s full remarks in Arabic, Chinese, English, French, Russian, and Spanish, as well as the prepared remarks written in French are available on the U.N.’s website HERE.