United Nations Secretary General Ban Ki-moon addresses the cholera epidemic in Haiti during his opening address to the UN General Assembly.  Ban expresses his “tremendous regret” in regards to the outbreak, but had first acknowledged in 2014 the UN’s “moral responsibility” to provide aid to those affected by the outbreak.  Recently a spokesperson said that the UN was putting together a “significant new set of actions” to help Haiti in the fight against the cholera epidemic. 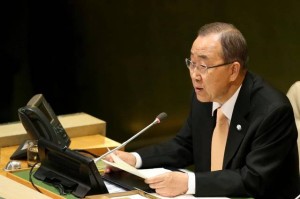 “I feel tremendous regret and sorrow at the profound suffering of Haitians affected by cholera,” he said. “The time has come for a new approach to ease the plight and better their lives. This is our firm and enduring moral responsibility.”

It was the first time since the cholera outbreak began in 2010 that Ban, who has four months left on his 10-year tenure as the head of the United Nations, mentioned the deadly epidemic in his annual address to the General Assembly.