After the 2010 earthquake, many donors were pained to learn how little of their contributions actually went to Haiti. The American Red Cross was a prime example, according to an investigation by ProPublica and NPR.

“The reputation of the Red Cross in Haiti is very negative,” Nicole Phillips of IJDH said.

In the same way consumers “shop local,” the solution is to give local. Rather than donating to foreign NGOs with high overhead costs to help Haitians after Hurricane Matthew, Edwidge Danticat and others advocate for organizations based in Haiti. Nicole Phillips, who lives in Haiti, said, “By giving money directly to the Haitian network, you’re cutting out a huge sum of cost that otherwise would have to pay for the middleman, for plane tickets, accommodations, et cetera  — it’s going directly to Haitians.”

Local organizations, and NGOs with a proven track record, are listed at the end of the article, and here.

Should You Trust The American Red Cross With Your Donation For Haiti? 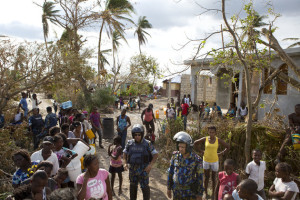 Hurricane Matthew left a catastrophe behind in Haiti, killing 1,000 people and displacing thousands more. Public health experts fear the situation could get worse if contaminated water leads to a cholera epidemic like the country saw after a 2010 earthquake.

People and aid organizations from all over the world are responding with donations of money and supplies. But activists working in Haiti increasingly ask donors to give to local organizations ― not the American Red Cross, traditionally one of the biggest disaster-relief charities.

The Red Cross, the world’s 16th-largest charity with a yearly budget of more than $3.1 billion, has a complicated history in Haiti. The group raised $500 million in donations after the 2010 earthquake, promising to provide shelter, rebuild infrastructure and meet basic needs.

But a 2015 investigation by ProPublica and NPR found that the Red Cross fell short of its promises. The charity had only built six permanent homes in the entire country, the media organizations found, and its efforts were plagued by internal disorganization, lack of experience in Haiti, use of donations for its own expenses, and tensions with residents and government officials.

The Red Cross claimed 91 percent of all donations went directly to charity. ProPublica and NPR found that in 2010, only 60 percent did. The remaining 40 percent of donations funded Red Cross program management and overhead costs. Haitians told reporters that aid the Red Cross promised was simply never delivered.

The Red Cross disputes the reporting. “Our expansive program was reduced to a headline, and it’s completely unfair,” said Lesley Schaffer, regional director for Latin America and the Caribbean for the Red Cross. “These people did not spend any more than just a few days in Haiti. They did not give us a chance to show them the work that we do.”

Still, the report has tainted the image of the Red Cross, particularly in Haiti, and prompted calls for Hurricane Matthew relief to be directed to local groups.

“The reputation of the Red Cross in Haiti is very negative,” Nicole Phillips, a staff attorney with the Institute for Justice and Democracy in Port-au-Prince, told The Huffington Post in an interview. “Some good work was done by the Red Cross, but I think the overwhelming experience from Haitians with the Red Cross has been disappointment and frustration.”

Acclaimed Haitian author Edwidge Danticat suggested sending donations to Haitian aid groups that have been working in the country for years, including Paradis des Indiens, The Three Little Flowers Center, and the St. Boniface Haiti Foundation. 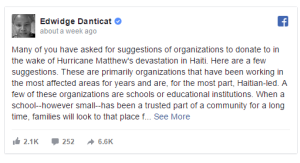 Isha Rosemond, public relations manager for Camp-Pericare, a Haitian-run organization that coordinates with aid groups, said philanthropy must engage with locals in order to be effective.

“It provides perspective from the people running it to understand how past organizations may have taken the accolades that come along with time without actually affecting change,” said Rosemond. “Many Americans see Red Cross as the pinnacle for giving, but when in places like Port au Prince, you hear the disdain locals have toward the organizations. Haitian-run organizations also have the advantage of community, knowing who to reach out to when needing something.”

Critical reporting on the Red Cross isn’t limited to Haiti. Other ProPublica investigations found that the organization’s spending commitments can be misleading. Reporting revealed instances where the Red Cross diverted funds from aid to public relations after Superstorm Sandy and Hurricane Isaac, according to ProPublica.

The Red Cross’ Schaffer rejected the suggestion that donors should avoid giving to her organization.

“We’re passionate about Haiti. We do excellent work in Haiti,” said Schaffer. “Hurricane Matthew was very serious. It’s caused severe damage to the country. This is a tragedy of historic proportions. We’re proud of our work in Haiti. We’re distressed if people aren’t confident in donating to the Red Cross.”

Despite the Red Cross defense, many activists point out the advantages of contributing to Haitian-run groups.

“Haitians know how to help other Haitians better than we do, and their efforts are extremely impressive,” said Phillips, an American who now lives in Haiti. “By giving money directly to the Haitian network, you’re cutting out a huge sum of cost that otherwise would have to pay for the middleman, for plane tickets, accommodations, et cetera  — it’s going directly to Haitians.”

How You Can Help

Here are charities, most of them local, suggested by author Edwidge Danticat: