In the wake of Hurricane Matthew, Haiti has experienced vast amounts of devastation.  However, the disaster that has unfolded is not natural – it has been propagated by decades of marginalization of the Haitian people, and their constant struggle to rise above the economic, social, and political barriers that plague them.

Part of the article is below.  Click HERE to read the full article.

Chronicle of a disaster foretold 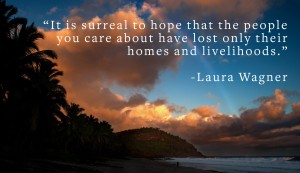 On Monday, October 3, my friend Claudine St. Fleur’s father was supposed to send her provisions from Degerme, their home community in the mountains above Abricots, a town on the far southwest coast of Haiti, west of the larger town of Jérémie. He grows yams, plantains and breadfruit in the fertile red earth abutting their lakou, the traditional Haitian family homestead, and catches fish in the sea a short walk from their front door. Whenever he can, he sends crops and salted fish to Port-au-Prince. It is one of the many ways that rural farmers support their children who live and attend school in the capital, where food is expensive.

But by October 3, a travel ban was in effect between Haiti’s departments, so he did not hike down the mountain to Abricots with a heavy plastic sack filled with food that day. He did not ride to Jérémie to send that food to Port-au-Prince aboard a crowded passenger ferry. Instead, he stayed home and prepared as best he could for the hurricane that was coming, bracing his family for this latest blow.

This is not a natural disaster. There is no such thing as a natural disaster. Disasters are the result of socioeconomic factors and “slow violence,” and poor and marginalized people, be they in crowded urban neighborhoods or faraway rural communities, disproportionately bear the long-term effects. Hurricane Matthew in Haiti, like the 2010 earthquake, are what historian Laurent Dubois termed “aftershocks of history” — catastrophes created and exacerbated by the centuries of political, ecological and social histories that preceded them.