Hurricane Matthew and its Unnatural Ramifications

Hurricane Matthew has left a path of devastation and destruction in its wake, ruining much of Haiti’s infrastructure and displacing tens of thousands of its citizens.  The hurricane alone, however, is not the only thing to blame for the damage done.  A history of maltreatment and injustice has left Haiti, one of the poorest countries in the world, much more vulnerable to natural disasters.

For Haiti, Hurricane Matthew is an Unnatural Disaster 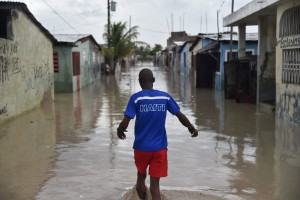 At least 1,000 people were killed when Hurricane Matthew battered the Tiburon Peninsula in Haiti last week, destroying houses and displacing tens of thousands.

A humanitarian crisis is now unfolding for the survivors, with the Pan American Health Organization warning of a likely cholera surge in the country due to severely damaged water supply and sanitation systems.

Several other Caribbean island states have been affected, including the Dominican Republic, Jamaica, Barbados, Saint Vincent and the Grenadines, Cuba, and the United States.