A Call for the Repayment of Debts to Haiti

Hurricane Matthew devastated Haiti last weekend, a country still reeling from the effects of its last natural disaster: the earthquake in 2010.  In this time of need, this editorial calls for long overdue repayments to Haiti from countries that have long affected the prosperity and success in Haiti.

The Guardian view on Haiti: time to repay our debts 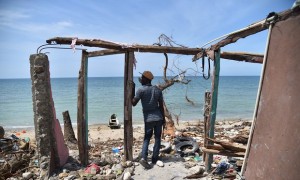 Haiti, yet to recover from 2010’s terrible earthquake, is reeling again. This time, Hurricane Matthew has devastated the country, whose acting president, Jocelerme Privert, has warned that famine could soon take hold. The UN has launched an emergency appeal for almost $120m to provide “life-saving assistance and protection” and has warned that 750,000 people need help urgently. The current death toll of many hundreds could spiral: there are fears that flooding and other damage to water supplies could prompt a fresh spike in cases of cholera, which has killed 10,000 people in six years.

Haiti’s vulnerability owes something to geography, and much to history. In general, poor and underdeveloped countries suffer more from such events than more developed ones do – and Haiti is one of the poorest and most unequal in the world. Almost a quarter of its population lives under the national extreme poverty line of $1.23 a day. Inadequate infrastructure, poorly constructed homes and hand-to-mouth living all contribute to the risk that events such as hurricanes turn into catastrophes – not really natural but unnatural disasters.

The country’s leaders have failed their people repeatedly – and another repercussion of the current crisis has been the postponement of long-delayed elections to produce a legitimate government – but others must take the blame too. After the slave-led revolution of 1791 created the world’s first black republic, France demanded compensation for its settlers and slave-owners: 90 million gold francs – estimated at somewhere between $17bn and $21bn in contemporary terms. At one stage, repayments consumed four-fifths of the national budget. The Caribbean nation did not pay off this debilitating debt until 1947.

French president François Hollande last year acknowledged the debt his country owes to what was its most profitable colony – but hastily described it as “moral”, lest Haitians get carried away with the idea that repayment might be forthcoming. It is more than that: it is a real, concrete obligation, which cannot be relegated to the past because of its enduring impact. The case for reparations to Haiti is not even, as it is elsewhere, about attempting to compensate for the damage caused by slavery and colonisation; it is about the outrage of forcing a country to pay for freeing itself. A really substantial contribution to relief and recovery efforts, in a manner that genuinely aids its former colony, is the very least Paris could offer.

There are more recent debts, too. Foreign involvement has often proved better for donors than the recipients, as Bill Clinton acknowledged of policies under his presidency that wiped out Haitian rice farming. Development experts complain that much money poured into the country since 2010 has been wasted, in part because of reliance on foreign consultants rather than local programmes and actors. Worst of all, Haiti’s current cholera outbreak is entirely the responsibility of the UN, whose peacekeepers brought it from Nepal after the 2010 earthquake, and refused to acknowledge its role until very recently. The UN’s efforts to develop a proper package of payments to victims and families will for now take second place to boosting the battle against the disease, but must not be forgotten. What Haiti needs most is justice, not charity.