In 2010, United Nations peacekeepers introduced cholera to Haiti, sickening more than 700,000, and killing over 9,000 people. As of Sunday, Port-Salut HCR Hospital started to see more cases of cholera, which is a water-borne disease. “Cholera is going to spread, no doubt,” said Mario Joseph of BAI-IJDH, who sued the UN on behalf of Haitian cholera victims.

After Hurricane Matthew, cholera is once again threatening storm-ravaged Haiti 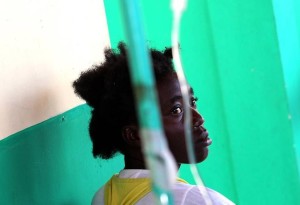 On Sunday, as Haiti faced the double threat of starvation and cholera — the deadly water-borne disease that since 2010 has sickened more than 700,000 and killed over 9,000 — Port-Salut HCR Hospital was once again starting to see cholera cases.

By Sunday, the hospital, which has only five cholera beds, had registered one death at 3 a.m. and had six cholera cases. In the Grand’ Anse, where the storm turned a once-green ecological reserve into a desert of dead trees, doctors were also seeing cases.

“I can’t say how many, but there are a lot,” said Dr. Sophia Cherestal, with Doctors Without Borders.

Meanwhile in northwest Haiti where Matthew battered Bombardopolis, a dirt-poor community in the hills of Môle-Saint-Nicolas, four people have already died since the storm, said Dr. Rony Pierre, in charge of the health ministry for the Northwest. Several cases have been confirmed in that community and in nearby Ile de LaTortue, an island off the northwest coast.

For days, Haiti’s health ministry has insisted that it had pre-positioned aqua tablets and oral rehydration serum around the country to fight the scourge of cholera, an acute disease that can kill within hours if untreated.

And while according to Pierre, health officials have started to distribute life-saving supplies in the Northwest, doctors, nurses and residents in southwestern communities around Port-Salut, like Roche-a-Bateau and Port-à-Piment, say they have yet to see any supplies. Meanwhile, the cases keep coming.

“With the hurricane, it’s certain that in the coming days cholera will rise,” said Dr. Stevenson Desravines, who works at the Port-Salut hospital, which has been receiving referrals from Port-a-Piment. “They don’t have aqua tablets to treat the water.”

Evens Samedi, 23, ended up at the cholera clinic after stomach pains, diarrhea and vomiting woke him up in the middle of the night. Samedi, who took a motorcycle-taxi to the clinic, said he started getting sick after drinking water from a spring.

Always fearful of contracting cholera, he said, he suspected the water could make him ill but he had nothing else to drink.

Samedi, who lives in Roche-a-Bateau, a rural community that was pulverized by Matthew, said his uncle also drank the water. But his uncle, suffering from stomach pains, was refusing to seek medical attention, he said.

As Samedi fought back the pain while sitting a wooden bench with an IV attached to his hand, Nolen Hyppolite slowly pushed an IV pole across the room. Frail, she sat down next to him, holding onto the pole for support.

Hyppolite said she wasn’t convinced that she had contracted cholera, even though that’s what doctors were treating her for. She said she had drunk well water in the days after Matthew flattened her home outside Roche-a-Bateau, where almost every home lining the beachfront was destroyed in the Category 4 storm.

“Even before this, the water used to make me sick,” Hyppolite, 24, said. “But since I couldn’t get any aqua tabs to treat the water, I drank it. You can’t live without drinking water.”

Hyppolite said something else probably caused her sickness — the trauma of the storm or gas, because she doesn’t always eat properly.

Emmanuela Denis, a nurse at the hospital, said it’s common for patients like Hyppolite to blame their ailments on everything but cholera. But the center treats all suspected cases the same.

According to the ministry of health, there are 62 cases of cholera alone in Port-a-Piment and 37 in Jeremie. They had none counted for Port-Salut, despite the fact that several patients were being treated at the HCR hospital and one corpse was still covered with a sheet in the cholera treatment center Sunday. The storm’s waters had split the main bridge connecting Port-a-Piment and Roche-a-Bateau in two, complicating matters. Still, a Land Rover from Doctors Without Borders managed to drive through the river to haul cholera treatment supplies to Port-a-Piment from a trailer parked on the other side.

Haiti was already in the midst of the rainy season before the storm, and as a result, some say those with cholera were ill before Tuesday when the storm hit.

“Cholera is not worsening as a result of Matthew based on the incubation period,” Dr. Gabriel Timothée, the director general of the health ministry said.

Still, doctors in areas that have been hard-hit by the storm say they’ve seen an increase in cases since Friday. Making matters worse, said one worker, is that several health clinics have been damaged and health providers are staying home.

“Cholera is going to spread, no doubt,” said Mario Joseph, a human rights lawyer who is part of a team that sued the United Nations on behalf of Haiti’s cholera victims.

Joseph said he had heard reports of increased cholera cases in the outskirts of Port-Salut and he drove from the capital to investigate for himself.

“People are really afraid that more people are going to die because of this complicated situation,” he said, standing on a street in Roche-a-Bateau. “It’s not normal that three, four days after the storm we have people dying. There are roads. They can come and get help.”

Observers say while a resurgence of cholera is what most scares them, they also fear an onset of other water-borne diseases. Matthew’s rains flooded septic tanks, raised graves and drowned livestock.

Still, in the days that followed, Haitians could be seen in Leogane walking barefoot in flood waters, bathing and washing in dirty river water in Port-Salut and drinking untreated water in the Grand’ Anse.

“All of the wells are broken,” said Ericq Eracin, 21, one of scores of hurricane victims who had sought shelter at a school on the outskirts of Jeremie. “If we get a cholera outbreak here, it would be really bad for us. We’re already suffering. Our only salvation is to find some water.”

Mourad Wahba, the United Nations resident humanitarian coordinator for Haiti who visited Jeremie a few days after the storm, said the problems with sanitation and water require urgent attention.

“There is going to be a health crisis if we don’t do something fast,” Wahba said.

As fears of the epidemic’s worsening emerged last week, the United Nation’s Central Emergency Response Fund released an $8 million loan to UNICEF to increase its response to the epidemic. On Monday, the global body is expected to launch a post-Matthew humanitarian appeal for Haiti that will also include money for cholera, said Yvonne Helle, country director for the United Nations Development Fund.

Before Matthew became a threat, the United Nations was preparing to seek between $360 million and $400 million for a new cholera plan in Haiti. The plan came after U.N. chief Ban Ki-moon finally acknowledged the organization’s role in introducing cholera to Haiti — where it hadn’t been seen in a century — after the country’s Jan. 12, 2010, earthquake. The outbreak after the earthquake was traced to U.N. peacekeepers.

Dr. Renaud Piarroux, a French doctor who has studied Haiti’s cholera epidemic, said the hurricane response should not replace the efforts to rid Haiti of cholera. Now is the time, he said, to strengthen the fight.

“We need teams of Haitian civil protection workers to travel to all localities to measure the extent of the damage and repair what can be. If there are cases of cholera, they need to send teams to avoid the occurrence of outbreaks,” Piarroux said from Paris. “The day we eliminate cholera in Haiti, it will be less of problem that needs to be solved in the aftermath of a hurricane.”