After Matthew, Haitian Cholera Victims Need Justice More than Ever

Last month, the United Nations finally admitted responsibility for the cholera epidemic in Haiti, and Secretary-General Ban Ki-moon has even promised to reveal a plan to fight cholera. Now that Hurricane Matthew has brought even more water into a place where contaminated water is a major problem, Haitian cholera victims need the UN response even sooner. Some are skeptical that cholera can be eliminated in Haiti but it has been eliminated in other poor countries around the world as recently as 2000. The UN just has to be willing to invest in solving the problem it caused. 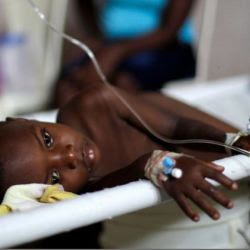 The United Nations took responsibility for starting the cholera epidemic in Haiti that has killed over 9,000 people and sickened hundreds of thousands more. After six years, it admitted that it brought Vibrio cholerae, the bacteria that causes cholera, to Haiti when a  peacekeepers battalion arrived from Nepal in October 2010.
Secretary General Ban Ki-moon made the U.N.’s culpability clear when he referred to the tragedy in his opening remarks to the General Assembly. While addressing world leaders in French, he spoke directly about the cholera epidemic while stressing the need for a new strategy.
“I have a lot of regret and sorrow for the terrible suffering of the Haitian people affected by cholera. A new strategy is needed to alleviate their distress and improve their living conditions. We are firmly resolved to fulfill this moral responsibility.” he said,  “Later, I will give you details on this strategy. Let us work together to meet our obligations to the Haitian people.”
And now, with the damage from Hurricane Matthew, the situation will get much, much worse – and quickly. Because cholera is spread through contaminated water, the destruction brought by Matthew – devastating infrastructure and bringing in more water, is a one-two punch of the worst kind.
…
Click HERE for the full text.