The Verge interviews David Nabarro, the British doctor responsible for mobilizing the UN’s 2014 response against the ebola epidemic, who has been chosen by UN Secretary General Ban Ki-moon to coordinate action regarding the cholera epidemic currently taking place in Haiti.  He discusses the short-term, immediate action that must be taken, especially in light of Hurricane Matthew, and the longer-term trust rebuilding and assistance the UN must provide to Haiti. 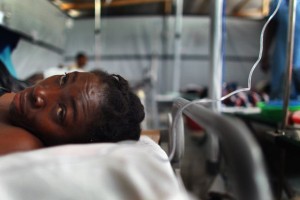 Haiti has been grappling with a devastating cholera epidemic for six years. The outbreak began in 2010, nine months after the small Caribbean island of 10 million was hit by an earthquake that leveled much of the capital, Port-au-Prince, and killed as many as 300,000 people.

The unfortunate timing, and the fact that Haiti is the poorest country in the Western hemisphere, has made the epidemic particularly bad. Most of the island lacks an adequate sanitation system and many people don’t have access to clean drinking water. To make things worse, Haiti is in the path of many tropical storms, which cause flooding and destruction that only help waterborne diseases like cholera spread.

Earlier this month, Hurricane Matthew hit the southwest part of the island, destroying cholera treatment facilities and water-distribution systems. And hundreds of new suspected cholera cases have been reported in the areas hit by the storm. The World Health Organization is sending one million cholera vaccines to the island but that’s not enough. Cholera causes severe diarrhea and can kill within hours if it’s not treated. The disease has already killed almost 10,000 people and made about 700,000 ill.