The destruction caused by Hurricane Matthew has hit hard in Haiti.  The damage and flooding have only served to make the cholera outbreak that began in 2010 worse, and the international community, in particular the United Nations, needs a plan to combat the cholera outbreak and help Haiti in the wake of this devastating natural disaster. 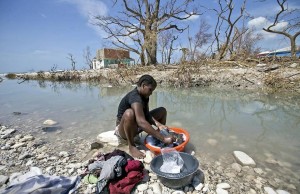 Last week, Hurricane Matthew slammed into Haiti, dealing another blow to our poorest, most challenged neighbor. After an earthquake in 2010 killed more than 200,000 people, a United Nations peacekeeping force introduced cholera to Haiti, infecting almost 800,000 people. According to Doctors Without Borders, there have been close to 30,000 cholera-related deaths. Six years later, the U.N.’s failure to address the cholera outbreak in Haiti and to develop a viable long-term plan to eradicate the disease continues to seriously undermine the credibility of its peace-keeping operations.

In the wake of Matthew, the challenge to the U.N. and the international community is now exponentially greater and more urgent. Many of Haiti’s 11 million people are now without safe drinking water, and the further spread of cholera is all but certain.