After working as a physician in Haiti for 30 years, Paul Farmer is “terrified” by the spread of UN-cholera. However, Dr. Farmer states unequivocally that Haiti has shown progress.

For example, he recounts the story of a 12-year old who may have been paralyzed by Zika or a number of things. The boy’s mother took him to the emergency room at University Hospital, a half-hour from the capital. The emergency room specialist “thought he would be asphyxiated if the paralysis hit the diaphragm, so she [the doctor] put him on a breathing machine and did a tracheotomy, which saved his life.” Haiti has shown progress in that the Emergency Room was open 24/7 and maintains an Intensive Care Unit.

While Dr. Farmer is “humbled” by his Haitian colleagues, he responds to the notion that Haitians are more resilient than other peoples: “resilience is not the same as survival.”

Dr. Paul Farmer Is ‘Surprised And Upset And Humbled’ After Visit To Haiti 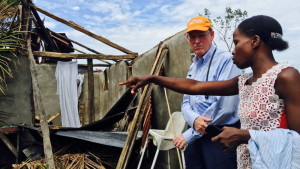 Paul Farmer has spent a lot of time in Haiti over the past three decades. Still, what he saw on his visit this past week left him “surprised and upset and humbled.”

Farmer is a physician and Harvard Medical School professor who co-founded the nonprofit Partners In Health. He has been a tireless advocate for Haitians, Haiti and the universal right to health care in even the poorest of countries. After the 2010 earthquake in Haiti, the group built University Hospital in Mirebalais, which has 300 beds. It’s the largest public sector hospital in the country, it’s funded to a large degree by the government and it helps train doctors and nurses.

Farmer went to Haiti last week to look at the aftermath of Hurricane Matthew. We spoke with him about his impressions.

The conversation has been edited for length and clarity.

What surprised you about the impact of the hurricane?

It’s easy to predict [that if] a Category 4 storm sits on Haiti, there’s going to be massive damage. But it seemed to me that we were unprepared for the gravity of it.

After the quake, it was larger concrete buildings that collapsed. Poor people’s houses were too small to fail. [With the hurricane,] first the roofs were ripped off, and then the trees came down. And what happens when people get hit by flying debris and haven’t had a tetanus shot and don’t have access to primary care? And what’s going to happen with cholera? Cholera treatment centers got blown away because they were built so shoddily.

You mean with tarps and other temporary materials?

Yes. They aren’t meant to last in the elements; they degrade very quickly.

Haiti has been facing a cholera outbreak since 2010. Do you think cholera could spread more widely after the storm as a result of people drinking contaminated water?

I don’t want to say I’m terrified, but that’ll do.

You can die in hours from cholera. It’s one of the true infectious disease emergencies.

In some parts of the country, people are cut off from medical care – local hospitals or clinics were damaged or else roads aren’t passable. How dangerous is that for cholera patients?

There’s a very wide spectrum of cholera. Sometimes it’s like a bad case of diarrhea. But you can die in hours from severe cholera. You can lose up to 10 liters of fluid a day or more. In a few hours you’re completely desiccated. You don’t have a lot of time to replenish the fluid and electrolytes that get lost.

You can do it with oral rehydration but you try drinking 10 quarts of that nasty [rehydration] stuff. It doesn’t taste good, and kids are notoriously noncompliant. I don’t think it’s alarmist to say that it’s an alarming spectacle.

How does the hurricane damage compare to the earthquake damage from 2010?

I ran into a friend of mine I’ve known for 25 years. He’s Haitian, a doctor, currently the No. 2 in the ministry of health. This guy is not given to hyperbole. And he thought in some ways it would be worse than the earthquake. Yes, you lose people and you lose houses with an earthquake, he said, but an earthquake doesn’t take out all the trees and gardens and livestock. What happens to a chicken or a small goat in 145 mile-per-hour winds?

They don’t make it?

My friend said they think 90 percent of all poultry were destroyed and probably more than half of the goats. Only big livestock wouldn’t be blown away.

Besides cholera, what pressing medical problems does Haiti face?

Care for pregnant women, for people who get pneumonia, [delivering] routine vaccinations.

And what would happen if you have a patient with tetanus? At the Brigham [and Women’s Hospital] here in Boston, they would be intubated and then paralyzed with drugs to stop spasms — the spasms can be so horrific you can fracture your backbone. And then their wound would be cleaned, and they would recover. We can do that now in central Haiti. We have an ICU. But we can’t get patients to the ICU by road. We have to send teams from central Haiti [to areas hit hardest by the hurricane].

When you talked with people, what was their reaction to the storm damage?

It was hard-bitten realism: “Look, our homes and livelihoods are destroyed.” But some people would say, “Hey, at least we’re not dead, at least the kids are alive.” If I were in that situation, I’d be ready to give up. I left thinking there were low-volume complaints for high-volume distress.

Is aid from outside groups arriving?

I think we could do better. I feel bad being critical of humanitarian responses but I feel worse for the people who lost everything. In the neighborhood where I was talking to people, they didn’t have shelters built and were asking for tarps. And this was Day 9.

In the presidential debate, Hillary Clinton talked about “all of the terrible problems” in Haiti. And as she noted, it is “the poorest country in our hemisphere.” Are there signs of progress?

The head of the University Hospital emergency room, a young Haitian woman I’ve known for some years, told me about a boy of 12 who was brought in at midnight. This was before the hurricane struck. He was coming home from school, felt numbness in his feet and couldn’t feel his legs — it’s what’s called ascending paralysis. He was an orphan. His aunt took him to five hospitals in Port-au-Prince and then at midnight came all the way to University Hospital — at least an hour and a half away [from Port-au-Prince]. The emergency room specialist thought he would be asphyxiated if the paralysis hit the diaphragm, so she put him on a breathing machine and did a tracheotomy, which saved his life.

Did the hospital find out what caused the paralysis?

What happened to the boy?

His paralysis started to subside. He could move his arms. He left in a wheelchair, and he’s going back to school.

How did you feel when you left Haiti after your week’s visit?

When I left, I felt inhabited by sadness, which you don’t necessarily feel in the middle of it. Because it wouldn’t be very effective if all the doctors were walking around crying.

And, as I said, I was humbled. I admire my Haitian colleagues and I admire the tough-minded lady I met who lost her crop and said, “Well, you know, I gotta go get more peanuts and corns and plant it.” I didn’t feel like asking the question: “What about between now and when you can harvest?”

It seems she has a spirit of resilience.

I heard last week, well, the Haitians are resilient. That 12-year-old boy seemed bright and resilient but he needed to be on a breathing machine to survive. In Sierra Leone during Ebola, I knew three doctors and two were dead of Ebola by November and, let me tell you, they were plenty resilient. That’s why I worry about the term “resilient.” Resilience is not the same as survival.