UN & US Accountability in the Haiti Cholera Epidemic

After Hurricane Matthew hit Haiti, 1.4 million Haitians are left needing emergency assistance.  The recent natural disaster is bringing with it the resurgence of a human-made disaster: the cholera outbreak that began with the presence of United Nations peacekeeping forces in 2010.  Although the UN has taken responsibility, they’ve fallen short of apologizing. Combined with US efforts to undermine the former government of Aristide, cholera has become an epidemic in Haiti.

How the U.S. and U.N. Set the Stage for a Major Cholera Outbreak in Haiti 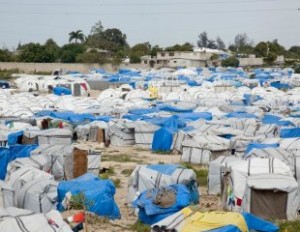 Scientists say the warming of the ocean due to human-made climate change has intensified mega-storms like Hurricane Matthew, which recently tore through the Caribbean and parts of the United States, killing more than 1,000 people in Haiti alone, according to some estimates.

Now, with 1.4 million Haitians in need of emergency assistance, Haiti is bracing for another human-made disaster: a resurgence of its cholera outbreak, which dates to the aftermath of the catastrophic 2010 earthquake.

It took six years for the United Nations to publicly acknowledge what the scientific community has long known: the cholera epidemic was introduced to Haiti by U.N. peacekeepers, originating at one of the global organization’s camps in the upper Artibonite River valley, and from there, spreading through the country’s crumbling water system. The global failure to swiftly acknowledge the source of the outbreak and take aggressive action to eradicate it, has left the country vulnerable to the new uptick in infections.