Activists in Little Haiti protest U.S. deportation policy of Haitians. They call the deportation policy “fickle,” because it breaks up families, with some freed and some locked up in detention camps awaiting deportation back to hurricane-torn Haiti, where cases of cholera are on the rise. Activists called on President Obama, and former Secretary of State Hillary Clinton to take action.

Steve Forrester of IJDH said, “They announced they were going to start deporting again, saying conditions had improved. Everybody knows that’s not true; it’s just not true. But Matthew makes it really obscene.” 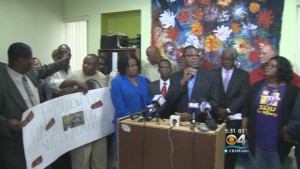 MIAMI – Speaking in Creole, Marie Carole Jeune sobbed as she spoke to a bank of reporters and television news cameras Monday at a Little Haiti community center.

She explained through her tears that her 20-year-old son is in an immigration detention camp in California, her home in Haiti was destroyed by Hurricane Matthew and her relatives there are all homeless and hungry.

At the news conference attended by a host of human rights organizations and immigrant activists there was a call for humanitarian aid, but a call too for the U.S. to reverse last month’s decision to resume deporting Haitian migrants.

“They announced they were going to start deporting again, saying conditions had improved,” said Steve Forester of the Institute for Justice and Democracy in Haiti.  “Everybody knows that’s not true, it’s just not true. But Matthew makes it really obscene,” said Forester, also noting an on-going cholera epidemic plaguing Haiti.

With the death toll from the hurricane over a thousand now, it promises to get worse.

The new immigration policy appeared fickle at Monday’s news conference. Norde Ludie and her 7-month-old daughter, Ralphaela were there, having been released from detention, but her husband remains locked up, facing deportation.

While the Catholic Church has been busy collecting relief supplies for Haiti, the church also weighed in on immigration.

“Now is the time to stand in solidarity with Haiti. It is not the time to deport people,” said Randy McGrorty, a representative from the Archdiocese of Miami.

The activists noted refugees from Hurricane Mitch in Central America still are protected from deportation, and Mitch was more than 14 years ago.

The president and one who could be president were called out at the news conference.

And the activists called the idea of sending anyone back to Haiti absurd.

“I don’t understand why we can’t get this right when it’s so simple.  It’s about life, it’s about family, it’s about kids,” said Leroy Jones of the Circle of Brotherhood.

Marie Carole Juene, still sobbing, pleaded with President Obama to help both her son and others facing possible deportation and those suffering in Haiti.

The Obama administration thus far has shown no indication it plans to change its Haitian deportation policy.