Need for US Aid to Haiti Following Hurricane Matthew

Haiti, while still in the process of recovering from the destruction of the 2010 earthquake and fighting a subsequent cholera outbreak brought by UN peacekeepers, has been devastated by yet another natural disaster – Hurricane Matthew.  The US needs to provide aid, both financial and otherwise, to Haiti in this difficult time.

Inquirer Editorial: U.S. shouldn’t wait until the next disaster to do more for Haiti 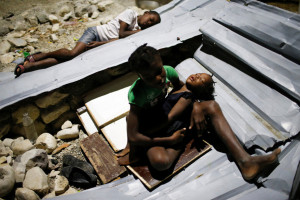 With so much happening in our country, including a pivotal presidential election and coastal states’ daunting recovery from Hurricane Matthew, maybe it’s understandable that the storm’s impact on Haiti has been an afterthought for many Americans. But the death and destruction in the Western Hemisphere’s poorest nation shouldn’t be ignored.

The United States and Haiti were the first nations in the hemisphere to break free from colonial rule. Americans fighting under George Washington declared their independence from Great Britain in 1776. Haitians led by Toussaint Louverture won their independence from France in 1804. But the Haitian rebellion was, in fact, a slave revolt, which made America’s slave-holding states uncomfortable and European nations dismissive.