The New York Times editorial staff opined Saturday: “Department of Homeland Security should immediately reinstitute temporary protected status for Haitians in the United States, and suspend efforts to deport unauthorized immigrants back to the disaster zone.” As Haiti struggles through the aftermath of Hurricane Matthew, combined with chronic poverty and cholera, it also faces “misguided disaster response.” In response to these issues, Haitians need temporary protected status, TPS and donations to seasoned, Haitian charities.

Part of the editorial is below. Click HERE for the full text. 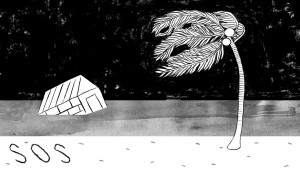 Hurricane Matthew battered Florida and points north on Friday, having already wreaked deadly havoc in the Bahamas, Jamaica, Cuba and Haiti. All those along its path need aid and protection and, when the wind and rain end, swift help in rebuilding.

But Haiti needs it most.

The southwestern part of the country, already isolated before being cut off by the storm, has been ravaged. In the city of Jérémie, about 80 percent of the buildings were flattened. The aerial photographs are heart-wrenching: What last week was an urban grid is now a smear of sticks, bricks and mud. The rough estimates of the nationwide death toll on Friday fluctuated — 200, 500, 800. All that seemed certain was that the number would rise.

Natural catastrophes are tragically familiar in Haiti, which was devastated by an earthquake in 2010 — an acute emergency laid cruelly upon chronic poverty and underdevelopment. But equally familiar is the tragically misguided disaster response. Charity flows in all directions, many of them wrong. It is sent to organizations with shallow connections in the country, to be managed by and for the benefit of non-Haitians, soaked up in overhead or misspent on projects that languish and development that never comes. Much pledged aid never arrives.

The pressing needs now, before the rebuilding, are clean water, food and health care. Among the most fearsome imminent dangers is the spread of cholera, the disease that the United Nations inflicted on Haiti, through the recklessness of its troops, then spent years shrugging off its responsibility for. With more than one million Haitians affected by the hurricane, the United Nations Population Fund has also been calling attention to the needs of pregnant women, more than 8,400 of whom are expected to give birth in the next three months.

The man who is expected to take over as United Nations secretary general, António Guterres, will inherit a special obligation to develop and fully fund a plan to bring clean water and sanitation to Haiti, and to revive a languishing effort to eradicate, not just contain, cholera.

The organization’s member nations, meanwhile, need to answer the urgent appeal for relief aid, and then deliver on their promises. The United States government has another responsibility, beyond humanitarian relief: The Department of Homeland Security should immediately reinstitute temporary protected status for Haitians in the United States, and suspend efforts to deport unauthorized immigrants back to the disaster zone.

People who are moved to help should temper generosity with caution, and consult guides to effective, reputable charities. Hard experience shows how donations go astray: The Red Cross raised $500 million in appeals after the Haiti earthquake, but reporters for NPR and ProPublica, in an exhaustive investigation, searched in vain for where all that money went.