History of Interventions & Exploitation Against Haiti

Hurricane Matthew’s devastation in Haiti is amplified by several remnants of colonial relations, military interventions by Woodrow Wilson and Roosevelt, and now today by “poorly implemented aid projects.” Law Street Media traces the history of economic exploitation of Haiti by France and Spain, and demonstrates the progression of “disappointments” by the United States and the United Nations: the U.S. continuing economic exploitation, and the UN continuing to deny responsibility for the increasing spread of cholera. Law Street cites IJDH’s Beatrice Lindstrom: “The need for a new UN response that both controls and eliminates cholera and compensates the victims who have suffered so much is now more dire than ever.” Using history and recent examples of exploitation, the article concludes: “Haiti will continue to be plagued with problems if the impoverished country is unable to properly recover from disease outbreaks like this, as well as devastating natural disasters.”

Part of the article is below. Continue HERE for the full article. 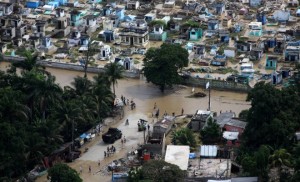 Communities in southwestern Haiti were devastated when Hurricane Matthew struck the Tiburon Peninsula on October 4, 2016. Accompanied by rapid winds, heavy rainfall, and subsequent flooding, the Category 4 storm on the Saffir-Simpson scale killed at least 1,000 people, destroyed countless homes, and displaced thousands. Approximately 2.1 million people have been affected, 1.4 million need humanitarian aid, 750,000 need urgent help, and 806,000 are at an extreme level of food insecurity. Haiti, which is roughly the size of South Carolina, was ill-equipped to withstand another natural disaster. For the past six years this Caribbean country has been trying to recuperate from the 2010 earthquake that left more than 200,000 dead (according to Haitian government figures) and wreacked havoc upon a preexisting weak infrastructure. Now history seems to be repeating itself.

Communication networks are down, crops were destroyed, and roads have been blockaded by debris–making it all the more strenuous for citizens to receive the assistance they desperately need. Simultaneously burdened by two catastrophes, once again Haitians are bracing themselves for another cholera outbreak. Yet with limited financial resources and crumbling medical facilities, some hospitals don’t even have enough gasoline to put into ambulances or any antibiotics left to ward off the waterborne disease.

Oftentimes referred to as the “republic of NGOs” (non-governmental organizations), Haiti rarely receives the aid it is promised. Although some would consider the poorest country in the Western Hemisphere to be susceptible to certain ailments (like inclement weather and bad governance), the reality of the situation is that Haitians haven’t gotten the necessary support to thrive as a sovereign nation after decades of economic exploitation, American military intervention, and poorly implemented aid projects. 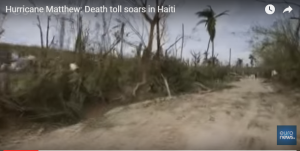 Continue HERE for the full article.