The following report from News Deeply describes how Brazil first deterred Haitian refugees, then the US shifted its policy to return folks to post-hurricane conditions; the Department of Homeland Security (DHS) increased its number of detentions and deportations, and people of faith have banded together to build a community-based response to the crisis. 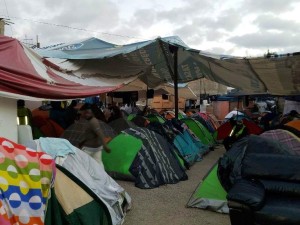 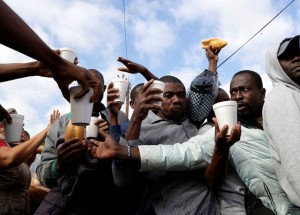 Over the past year, more than 5,000 Haitians entered the United States legally through the Tijuana-San Ysidro border crossing between Mexico and San Diego, California, after making a 7,000-mile (11,000km) overland trek from Brazil.

Their journeys can be traced back to the 2010 earthquake that ravaged Haiti, initially displacing 1.5 million people, claiming more than 200,000 lives, and laying the groundwork for a cholera epidemic that affected hundreds of thousands more.

Now, an estimated 5,000 further Haitians who traveled from Brazil are stranded in Tijuana on the Mexican border. With the number of Haitian arrivals growing, they often wait weeks for interviews with U.Sborder officials.

Migrant outreach centers in the border city are at full capacity, and tents serve as makeshift shelters. It looks, said Sam Jean-Francois, a San Diego-based Haitian-American volunteer, like a “refugee camp.”

What faces them on the other side of the border is no less concerning – detention and possible deportation.