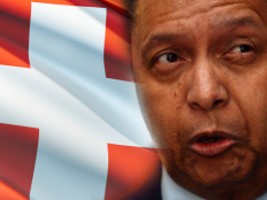 According to Roberto Balzaretti, the Director of the Directorate of International Law of the Federal Department of Foreign Affairs of Switzerland, his country wants to return as soon as possible to Haiti, the confiscated money of the former dictator Jean-Claude Duvalier totaling +/- 7 millions of dollars.

Director Balzaretti reminded reporters that the final decision in Switzerland on this case, which lasted several years, dates from 2013, when the Federal Court confirmed that it was legal to seize the money of the now deceased Duvalier.

Explaining that “The Swiss Confederation wants to return the money to Haiti and has been in contact with the Haitian authorities and the successive presidents… there is a general memorandum with Haiti and Switzerland knows what the Haitian authorities want to do with this money, but the political situation, repeated elections, hurricanes and other circumstances have made things a bit difficult,” adding “Our goal is to finalize as soon as possible an agreement with Haiti to allocate funds to projects such as civil rights, democracy or memory initiatives to help communities return to normal life… […] But we need an appropriate framework that is not there yet, to ensure that the money is properly spent on what was agreed in the memorandum.”