Haiti’s Provisional Electoral Committee, CEP, declared Jovenal Moïse the winner of Haiti’s presidential election, with 600,000 votes. 2nd was Jude Célestin, and third was Moïse Jean-Charles. After hurricane Matthew and lacking funding for elections, voter turnout was especially low. Due to “irregularities,” 10% of the tallying sheets were thrown out, and without explanation three of CEP’s nine members did not sign off on the results. Below is an excerpt of The Guardian‘s report.

Moïse, a banana exporter who ran for former president Michel Martelly’s Bald Heads party, won with 55.67% of votes cast in the 20 November election, the electoral council said on Monday. The result avoids a second round run-off next year. 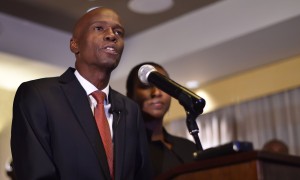 Jude Célestin, a mechanical engineer who had led a government construction firm, came in second. He received just under a fifth of the vote.

However, turnout was low and 10% of sheets tallying votes were thrown out because of irregularities. In a country of 10 million people, Jovenel Moïse received just 600,000 votes.

Three people on the nine-member electoral council did not sign the report declaring Moïse the winner, although the council’s president did not say who had abstained.

Those elements fueled a universal condemnation of the results from the losing candidates, who have 72 hours to contest before the final results are released on 29 December.

“We reject the results because they are invalid votes that have been counted,” said Michel André, a lawyer for second-place finisher Célestin. “Jude Célestin will challenge the results.”

Moïse Jean-Charles also said on Tuesday that he would fight the results. “The outcome of the election is the result of a conspiracy by the economic oligarchy and sectors of the international community,” he said.