Activists in Haiti and Boston won a victory when outgoing United Nations Secretary General Ban Ki-moon issued an apology. In Boston, Charlot Lucien and others collected signatures to deliver to the UN, and others demonstrated at UN headquarters.

Executive Director Brian Concannon said BAI’s office in Haiti applauded Ki-moon’s apology, “the sincerity was enough to trump the fact that [the apology] was limited.”

Concannon and Haitian activists will continue to keep the UN accountable for its new water and sanitation initiative, which “needs to be fully funded and well executed.” 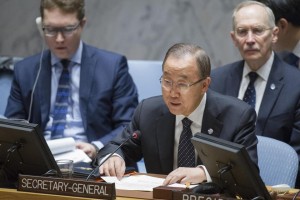 Charlot Lucien has been trying to get the United Nations to apologize for years.

Like a lot of people in Boston’s Haitian community, and in the vast diaspora beyond it, he believes that the international organization owes Haiti an apology — at the very least — for introducing cholera to the country in the wake of the 2010 earthquake that rocked the island.

Last week, his hopes were partially answered. Outgoing Secretary General Ban Ki-moon issued an apology for the effects of the disaster, and outlined a plan to address the misery it has caused. The UN is committed, he said, to raising funds to improve the water supply and sanitation, and to compensate the families of the deceased. Those actions could cost an estimated $400 million, most of which has yet to be raised.

Cholera was introduced to Haiti by a peacekeeping force from Nepal that was sent there after the quake. It’s been a medical and humanitarian disaster. Officially, the cholera epidemic has claimed close to 10,000 lives, but many knowledgeable observers believe the true toll is far higher than that.

In now acknowledging its role, the UN yielded to four years of constant pressure. It has faced lawsuits, protests, and petitions. The pressure was international, but no small part of it came from Boston, where dedicated human rights lawyers joined forces with local activists to explore novel ways to push the UN into action.

Lucien’s activities included collecting signatures on Blue Hill Avenue during a Haitian Unity parade to deliver to the UN. Other activists here have demonstrated at United Nations headquarters. The Institute for Justice and Democracy in Haiti, a Boston-based human rights organization, sued the United Nations on behalf of the victims, challenging its sweeping legal immunity. Their suits were vital in bringing the issue to the public’s consciousness.

Ban apologized for the effects of the epidemic but stopped short of admitting that the UN caused it in the first place. That struck some observers as half-hearted, but it was cheered by Haitians themselves as a sincere expression of contrition.

“When we talked to Haitians who went to New York to watch it and talked to our office in Haiti, [they said] the victims spontaneously broke into applause,” said Brian Concannon, the executive director of IJDH, the human rights group. “The Haitians picked up that he really was sorry. And the sincerity was enough to trump the fact that [the apology] was limited.”

Concannon noted that many details in the new water and sanitation initiative are yet to be determined. “It’s an enormous step forward, and an abrupt change of direction,” he said, but noted that promises alone won’t save lives. “It needs to be fully funded and well executed.”

The most obvious issue is simply getting member states to contribute. Concannon said the UN has raised much of the $200 million it says it will contribute to cleaning up the water supply and improving sanitation, to finally arrest the spread of the disease.

But the UN also has to find a way to lend assistance to the families who lost relatives to cholera. It isn’t yet clear whether victims will receive some form of restitution. I think they should.

For now, it’s a victory that sustained public pressure has forced one of the world’s most powerful institutions to own up to a tragic mistake. The advocates who took up the issue were scorned at first. Not only was the UN immune to being sued, it seemed immune to public opinion as well. No more.