After nearly six years of denial in order to avoid accountability for bringing a deadly cholera epidemic to Haiti, Secretary-General Bakn Ki-moon finally apologized in an address before the UN General Assembly. In the same address, he also provided more details on a new two-track UN plan to eliminate cholera from Haiti and provide “material assistance.” The UN plans to meet with Haiti and with victims and their families to flesh out the plan. During the Assembly, over 20 countries spoke to commend the plan, the apology, and pledge their aid. This article also quotes Mario Joseph, Managing Attorney of BAI. 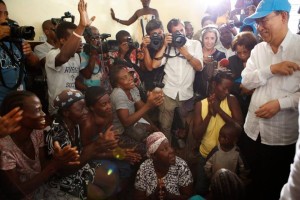 The day before United Nations Secretary Ban Ki-moon was set to make the case that ridding Haiti of the scourge of cholera should be a humanitarian funding priority, human rights attorney Mario Joseph wondered whether the outgoing world leader would finally issue a long-sought public apology.

For six years, Ban had refused to either apologize or acknowledge the role of his blue-helmeted peacekeepers in introducing the deadly waterborne disease to Haiti during relief efforts after a devastating earthquake that killed more than 300,000.

“The U.N. secretary general has always hidden behind lies in order to avoid admitting that they were the ones responsible for bringing cholera to Haiti,” said Joseph, who heads the Bureau des Avocats Internationaux, a partner of the Boston-based Institute for Justice and Democracy in Haiti, which filed a lawsuit on behalf of 5,000 cholera victims.