Haiti’s long and drawn-out 2015 electoral cycle ended on January 29, 2017, with municipal elections and the last round of legislative run-offs. Balloting was reported to be mostly calm across the country, and a strong police force and U.N. officers were deployed to oversee the peaceful process. However, voter turnout was especially low in parts of the country, where some urge their fellow Haitians: “We should make our voices heard.”

Haiti Holds Final Round of Election Cycle Started in 2015 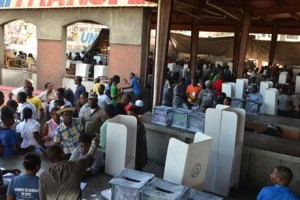 Haiti held a final round of legislative contests as well as long-overdue municipal elections on Sunday, closing a repeatedly derailed electoral cycle that started in 2015.

President-elect Jovenel Moise’s political faction and its allies are hoping to increase their majority in Parliament with eight legislative runoffs. Voters were also choosing 5,500 district authorities in local elections whose tardiness over a decade has exasperated many.

Alix Pierre, a Port-au-Prince lawyer and one of hundreds of voters gathered at a polling station in the Canape Vert section of Haiti’s capital, said he was relieved the 2015 electoral cycle was finally concluding.

“It took such a long time to get here,” he said after casting his vote.