Japan has pledged a $2.6 million grant to the United Nations Children’s Fund to support its program to reduce cholera-related deaths in Haiti. The grant will be used to further spread awareness about hygiene and cholera prevention, conduct surveys, and improve case management and rapid response teams on the island. Although coordinated efforts have helped reduce suspected cholera cases by 90%, 41,000 suspected cases were reported in 2016. The epidemic in Haiti has affected an estimated 788,000 people and continues to be the largest in the western hemisphere. 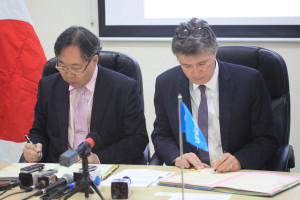 A new grant from the Government of Japan will allow the United Nations Children’s Fund (UNICEF) to help reduce cholera-related morbidity and mortality in Haiti in 2017 and 2018, the UN agency said in a news release.

“With this gift from the Japanese people, we will strengthen the axes of the fight against cholera in the protection of the Haitian population, especially children,” said Marc Vincent, UNICEF Representative in Haiti, welcoming the contribution.

“Japan is a key partner and we thank the Japanese people for their continued support,” he added.

Haiti has been dealing with a cholera outbreak since October 2010, some nine months after it suffered a devastating earthquake. The outbreak has affected an estimated 788,000 people and claimed the lives of more than 9,000. Concerted national and international efforts, backed by the United Nations, have resulted in a 90 per cent reduction in the number of suspected cases.