Lengthy Indictment of Guy Philippe Not Enough to Throw Out Case

After over 11 years under indictment, Haitian Senator-Elect Guy Philippe awaits federal trial after a Miami judge delayed the trial until May 1st. The judge criticized US federal authorities for not making a “consistent effort” to arrest Philippe during this 11-year span, although she stopped short of throwing out the case. Philippe was ultimately taken into U.S. custody on January 5, 2017, mere days before he was to swear in to the Haitian Senate, and the judge ruled that his status as Senator-Elect at the time of the arrest precludes political immunity. 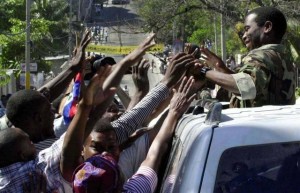 A Miami federal judge has rejected a motion to throw out a drug-trafficking indictment against Guy Philippe, a prominent public figure in Haiti who was arrested on the island by U.S. agents on Jan. 5, just days before he was going to be sworn in as a senator.

U.S. District Judge Cecilia Altonaga faulted federal authorities for not making a consistent effort to arrest Philippe since his indictment in late 2005, but found prosecutors did not violate his constitutional right to a speedy trial because he had “reneged” on a promise to turn himself in.

The judge also found that Philippe, 49, did not have immunity against prosecution as an elected public official in Haiti because he had not been sworn in before his arrest.