Newly revealed emails indicate that high-level American officials knew about the United Nation’s role in causing the cholera epidemic in Haiti from the beginning of the outbreak. Thus began a cover-up to protect the reputation of both the U.N. and the U.S., incriminating a wide range of people. The emails suggest that the investigation was flawed and “unenthusiastic,” despite growing evidence of the U.N. peacekeepers’ roles. It took six years from the outbreak of the disease for the public to hear an official apology from the U.N.; six years in which cholera killed more than 9,500 people and crippled Haiti’s healthcare system, infrastructure and access to clean water. Experts suggest that the real death toll could even be 2-3 times higher than this estimate, and cholera continues to kill approximately one Haitian per day.

What They Knew, and When They Knew It 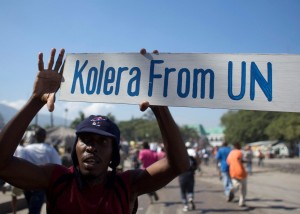 Halfway through her confirmation hearing in January, the nominee for U.S. ambassador to the United Nations, Nikki Haley, found herself navigating a river of human waste in Haiti.

Some suspected the then–president-elect had picked the South Carolina governor, who had no foreign policy experience, in order to exile a potential rival to an institution he’s derided as “a waste of time and money.” But for two and a half hours, as senators probed her on places like North Korea, Ukraine, and Israel, the nominee held her own, shoring up talking points with governor’s office banter.

That’s when Sen. Ed Markey, the junior Democrat from Massachusetts, asked about a crisis that threatens nothing less than the legitimacy of the United Nations itself. The crisis is the cholera epidemic in Haiti, a still-unfolding catastrophe that all available evidence shows began when U.N. peacekeepers from Nepal infected the country’s most important river system in October 2010. Yet still, after more than 10,000 people have died and incalculable damage has been done to a country the United Nations swore to protect, no one has been held accountable.

Haley’s first stab at an answer reflected the confusion at the heart of the new administration’s foreign policy. “What happened in Haiti is just nothing short of devastating,” she said. “It’s also why I think it’s so important that the contributing countries take responsibility and take actions against those violators that are doing anything to harm the people that they’re supposed to be protecting.”