The United Nations has been unable to move beyond mere promises in its efforts to support cholera victims and alleviate the epidemic in Haiti. After concrete evidence tied the cholera outbreak to infected UN peacekeepers, the UN is only at 2% of its goal to fund “The New Approach” to support Haitian victims and cholera projects. The United States has not joined the efforts, a notable absence after many pleas for contributions from the UN. However, as the Boston Globe Editorial Board writes, “there is still time for the US State Department to assert moral leadership.” The number of infected Haitians continues to climb, and an estimated 30,000 more will be infected this year; there is an urgent need, and cholera victims deserve justice now. 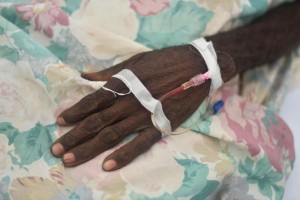 Late last year, Secretary General Ban Ki-moon offered an apology for the UN’s role in bringing deadly cholera to Haiti, during a speech that moved from Creole to French to English. Since then, there has been little more than silence.

Ban’s long-awaited apology came with a promising plan to help victims of the savage epidemic, called “The New Approach,” which envisions spending $400 million to support survivors and address the nation’s crumbling water and sanitation systems. But fund-raising — based thus far on voluntary contributions — has brought in only 2 percent of that total. As of last week, donors included South Korea, India, and Liechtenstein, among others, but not the United States. Without assessed contributions from member nations, the future looks grim indeed. Advocates and rescue workers estimate another 30,000 people in Haiti will get cholera this year. The often-lethal scourge has already killed more than 9,000 and sickened 800,000.