On Friday, March 24, 2017, Nissan Martyr died suddenly in Les Irois, Haiti. Martyr was one of three plaintiffs in a lawsuit against their former Mayor, who is alleged to have perpetrated a range of human rights abuses during his term in office. The Center for Justice and Accountability represents the plaintiffs and filed the lawsuit in a Massachusetts federal court. Martyr’s cause of death is unknown, and CJA urges the Haitian government to launch an immediate investigation into the circumstances of his death. CJA’s statement expresses condolences to Martyr’s friends and family and provides background information on the case.

The statement is shown below in its entirety. Click HERE for the original statement.

BREAKING: STATEMENT ON THE DEATH OF CJA CLIENT NISSAGE MARTYR

The Center for Justice and Accountability 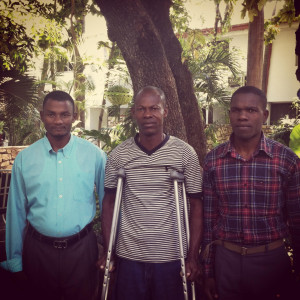 On the evening of Friday, March 24, 2017, our client Nissage Martyr died suddenly. Martyr had been enjoying an evening watching football with approximately 50 neighbors in Les Irois, Haiti, when he became violently ill.  He died en route to a hospital.  Martyr showed no symptoms of illness prior to his death.  His death comes one day after he and two other clients announced the filing of a human rights lawsuit against Jean Morose Viliena, former Mayor of Les Irois, who has been charged in Haiti for attempting to kill Martyr in 2008.

Scott Gilmore, Martyr’s attorney with the Center for Justice and Accountability, said, “Our heartfelt condolences go out to Martyr’s family and friends. We call on the government of Haiti to expeditiously and completely investigate to determine the cause of Martyr’s death.”

On July 28, 2008, Mayor Viliena led an armed group of men in an attack on Radio Nouvelle Vision, a community radio station operated from Martyr’s home.  During the raid, Mayor Viliena and his associates brutally beat Martyr and opened fire on him, resulting in the eventual amputation of one leg.  Mayor Viliena now lives in the Boston suburbs where he works as a school bus driver.

Since 2008, Martyr had faced repeated threats from Mayor Viliena’s associates in the political group KOREGA.  Nevertheless, he continued to file criminal and civil complaints with Haitian authorities and the Inter-American Commission on Human Rights (IACHR), with the assistance of the Bureau des Avocats Internationaux (BAI)/Institute for Justice & Democracy in Haiti (IJDH).

In July 2015, the IACHR issued precautionary measures ordering the Haitian government to protect Martyr, his family, and other witnesses in the case. They did not.  After exhausting all legal avenues in Haiti, Martyr sought to hold Viliena accountable in a federal court in Massachusetts.  On March 23, 2017, CJA and pro bono co-counsel Dentons filed a lawsuit against Mayor Viliena under the Torture Victim Protection Act on behalf of Martyr and two other victims.

Gilmore said, “Martyr dreamed of a better future for Haiti, free from political violence, where all Haitians can express themselves without fear of retaliation.  From founding Les Irois’s first community radio station to filing human rights cases, he understood the risks of fighting for freedom and he never gave up on that vision. We ask that until the cause of Martyr’s death is determined that the government comply with the IACHR order to protect the safety of Martyr’s family, witnesses in the case, including our other clients ”

We will update the statement should new facts be determined.

About the Center for Justice and Accountability

CJA is a San Francisco-based human rights organization dedicated to deterring torture and other severe human rights abuses around the world and advancing the rights of survivors to seek truth, justice and redress.  CJA uses litigation to hold perpetrators accountable for human rights abuses, develop human rights law, and advance the rule of law in countries transitioning from periods of abuse.

Dentons is the world’s largest law firm, delivering quality and value to clients around the globe.  Dentons is a leader on the Acritas Global Elite Brand Index, a BTI Client Service 30 Award winner and recognized by prominent business and legal publications for its innovations in client service, including founding Nextlaw Labs and the Nextlaw Global Referral Network.  Dentons’ polycentric approach and world-class talent challenge the status quo to advance client interests in the communities in which we live and work. www.dentons.com