The majority of the Haitian Senate voted in favor of a resolution that strongly condemns the arrest and extradition to the United States of elected Senator Guy Philippe. The resolution describes Philippe’s arrest as unconstitutional and cites an agreement dated October 17, 1997 as the source of the conflict. It urges the Haitian government to take the necessary steps for Philippe’s immediate return to Haiti and to assist Philippe and his family.

The Senate votes a resolution in favor of Guy Philippe 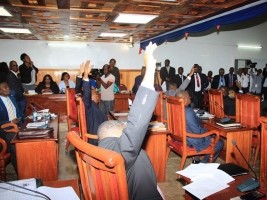 19 out of 24 Senators voted a resolution strongly condemning the arrest and extradition of their colleague, the elected Senator of Grand’Anse, Guy Philippe, on January 5 http://www.haitilibre.com/en/news-19721-haiti-flash-senator-guy-philippe-extradited-to-the-usa.html

In this resolution (proposed by Senators Carl Murat Cantave, Jean-Marie Ralph Féthière, Jean-Marie Salomon, Jean Renel Sénatus, Jean Rigaud Bélizaire, Kedlair Augustin, Pierre François Sildor and Richard Lénine Hervé Fourcand), the conscript fathers demand the return of Guy Philippe and all those who are illegally detained in the United States under the agreement of 17 October 1997.