U.N. Secretary-General António Guterres submitted a report detailing his suggestions for MINUSTAH’s gradual withdrawal from Haiti. He suggests phasing out the military component, and replacing it with a smaller mission to focus on strengthening the Haitian police force, the judiciary and human rights. Haiti is still in a period of transition, marked by a new and politically-inexperienced government and recovery from years of vulnerability to natural disasters. Guterres urges partners and U.N. member states to remain committed to supporting Haiti, leading up to and after MINUSTAH’s withdrawal, in order to ensure continued progress in Haiti. 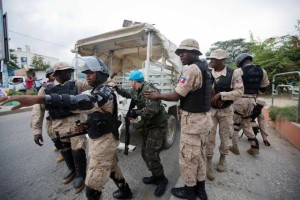 It’s time for the United Nations’ 2,300 blue-helmet soldiers in Haiti to head home after 13 years, the head of the world body recommended in a report to the U.N. Security Council this week.

U.N. Secretary-General António Guterres said that the peacekeeping operation in Haiti should close by Oct. 15. Guterres made the recommendation in a 37-page U.N. report obtained by the Miami Herald.

“The military component should undergo a staggered but complete withdrawal of the 2,370 personnel,” Guterres said of the U.N. Stabilization Mission in Haiti, which is more commonly known by its French acronym, MINUSTAH.

Guterres’ recommendation comes as President Donald Trump seeks to significantly cut the United States’ U.N. contribution with a particular focus on reductions in peacekeeping, environment and development. At the same time, the Trump administration is proposing to slash funding for the U.S. Agency for International Development, Haiti’s biggest donor.