What does life look like today for many Haitians, 6 months after Hurricane Matthew? The ongoing effects of the hurricane, and its implications for the coming months, create a bleak situation in which desperate community members cannot feed their families, but cannot make the changes necessary to ensure stability in the future. There is no food, and thousands of people still reside in temporary shelters, tents or caves without proper sanitation, rendering them vulnerable to cholera. Many children that were forced to leave school have not yet returned or are unable to do so, and farmers and fishermen lost the resources upon which they depend to make a living. Clearly, the “chaotic” situation in post-Matthew Haiti continues to leave many vulnerable Haitians at risk. 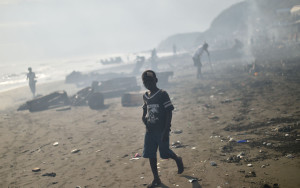 Crouching beside the makeshift shelter shared with his parents and five siblings, Fanfan Edouard slowly sharpens his machete. But there’s no rush to cut firewood, because there is no food to cook.

“I’ll try to buy rice on credit and find work, anything to pay later,” the 26-year-old says, speaking without much conviction.

But corrugated tin roofs do little to protect the two beds they share. When it rains, the family spends their nights in a nearby cave.

“We’re not comfortable because we have to pile up on each other, but it’s a chance for us to have a dry space,” says Edouard’s mother, Marguerite.

Having just one cave for shelter is hardly the main concern of the approximately 100 people who live in Fond Rouge, on the outskirts of Jeremie in the southwest of Haiti.

Matthew slammed the region around Jeremie in October 2016. The storm, which tore through the Caribbean, killed more than 700 people — mostly in Haiti — and caused some $2.8 billion in damage.