Detention and Deportations of Noncriminal Haitians Arriving from Mexico

On September 22, 2016, the Department of Homeland Security (DHS) began detaining for “expedited removal” (deportation) noncriminal Haitians appearing at Mexico-US border crossings; deportations began on November 3 and 8, despite the devastation wrought by Hurricane Matthew a few weeks earlier, and number about 300 per week on three weekly flights to Haiti. DHS is detaining about 3,000+ of them in dozens of facilities remote from any available attorneys and Creole interpreters, facilitating their deportation in violation of their right to assert political asylum claims.  Among other steps, IJDH has created the Haiti Deportations Response Network (HDRN) to recruit attorneys and interpreters to address the crisis.  Relevant articles are below. See also our sections on asylum claim resources, on Food Insecurity after Hurricane Matthew, and on Temporary Protected Status for Haitians.

On January 26, Caribbean360 quoted Steve Forester in their article “Haitians in US Dreading Deportation“.

On December 13, “Thousands of Haitian migrants amassed at U.S.-Mexico border unsure what’s next”

MoveOn.org petition, “End Cholera and Protect Haitians in the US”

On November 8, NewsDeeply reported on the “Humanitarian Crisis on U.S. Border: Haitians Stranded by Policy”

On November 8, the “U.S. government quietly resumes deportations to Haiti” as news about Hurricane Matthew died down.

MoveOn.org petition, “End Cholera & Aid Elections in Haiti; Protect Haitians in US,” based on the October 20 Florida leaders’ letter below (garnered about 4,500 endorsers).

On October 8, the New York Times editorial board urged TPS re-designation and a halt to deportations in light of Hurricane Matthew.

On October 5, a bipartisan letter to President Obama from 57 U.S. Representatives, co-sponsored by Rep. Frederica Wilson and circulated before Matthew struck Haiti, strongly urged reinstatement of the pre-September 22 parole and non-removal policy.

Thousands Of Deported Haitians And Africans Wait To Cross The Border In Tijuana – Konbini, March 13, 2017

US congresswoman Clarke calls on White House to halt deportations of Haitians November 10, 2016

Deportation to a disaster zone: Obama under pressure to stop crackdown on Haitian migrants as Hurricane Matthew wreaks havoc on island – Salon. October 7, 2016

End Cholera and Protect Haitians in the US – MoveOn.org petition to the U.S. House of Representatives, the U.S. Senate and President Barack Obama.

End Cholera & Aid Elections in Haiti; Protect Haitians in US – About 4,500 people endorsed this MoveOn.org petition to the U.S. House of Representatives and the U.S. Senate

Click HERE for links to over 80 editorials, resolutions, political letters, op-eds, petitions, and other support urging the President and DHS to create a Haitian Family Reunification Parole Program.

*If you’re looking for information on the Dominican Republic’s citizenship crisis, click HERE.* 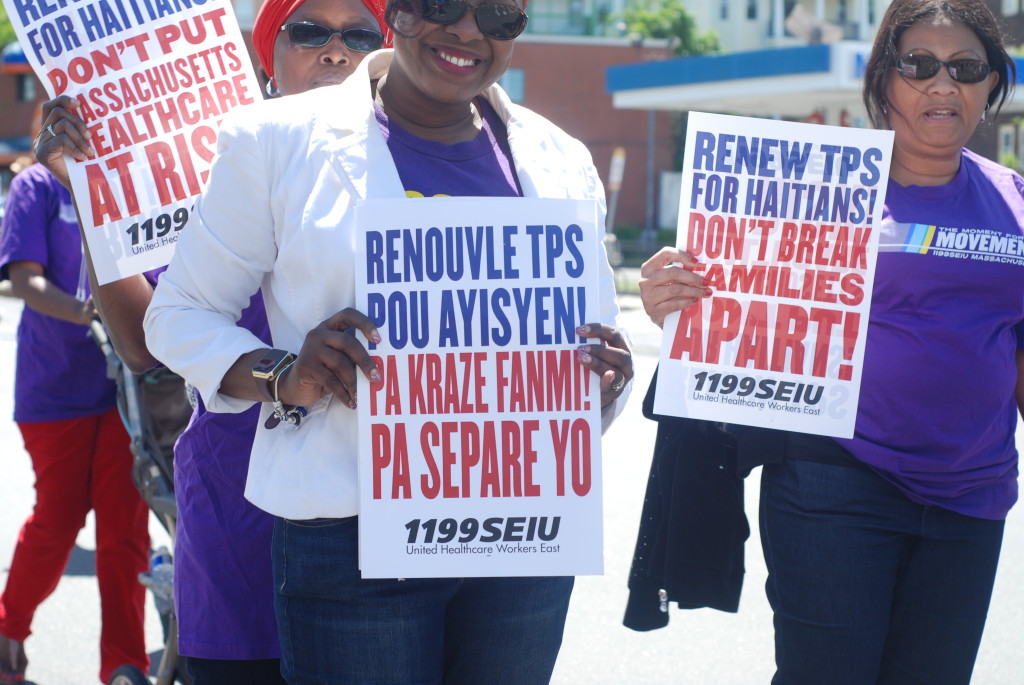 IJDH’s immigration advocacy is built on three decades of leadership in ensuring a safe haven in the U.S. for Haiti’s persecuted.  We seek creation of a Haitian Family Reunification Parole Program to save lives, reunite families, expedite orderly migration and speed recovery by increasing the flow of remittances to loved ones in Haiti. The Haiti Asylum Information Project (HAIP), established in 2004, has provided asylum applicants from across Haiti’s political spectrum the expert testimony and country condition information they need to present strong cases. Our Stop Deportations Now Campaign, the platform for years-long Temporary Protected Status (TPS) advocacy in Congress, the media, and the streets led to the suspension of all non-criminal deportations to Haiti in early 2009 and facilitated the immediate grant of TPS to Haitians in the United States after Haiti’s January 12, 2010 earthquake.

IJDH leads nationwide advocacy urging the Obama administration to create a Haitian Family Reunification Parole Program (HFRPP).  Nearly 110,000 Haitians are beneficiaries of family-based immigrant visa petitions which the Department of Homeland Security (DHS) has already approved but who remain on wait lists of up to more than 12 years in Haiti, where many may not survive.  A Cuban FRPP expedites family reunification for similarly-situated Cuban beneficiaries; IJDH has built extensive support and momentum for creation of a similar Haitian program. Our campaign succeeded on October 17, 2014, when DHS announced it would implement an HFRPP in early 2015 to expedite the entry into the U.S. of approved beneficiaries whose visas are within two years of becoming current. While thrilled with this development, which should help thousands, we will seek to expand coverage of the new program to include all DHS-approved beneficiaries in Haiti, many of whom are on wait lists of up to 12 years (not just two), and closely monitor its implementation to seek to insure its maximum effectiveness.

Click HERE for links to letters, resolutions, editorials, reports, petitions and op-eds urging creation of a Haitian FRPP to save lives and speed Haiti’s recovery.

TPS pro­tects most Haitians in the United States from depor­ta­tion to Haiti, and IJDH works with a broad range of advo­cates to trouble-shoot TPS imple­men­ta­tion issues as they arise.

Calls for re-designating TPS (and expanding HFRP) after Hurricane Matthew are HERE.

The Haitian Asylum Information Project (HAIP) is an online resource library for asylum applicants and their lawyers. It contains key documents, contact information, and model pleadings to facilitate the filing of successful Haitian asylum cases.

Take action now for fair immigration policy toward Haitians. Make your voice heard by signing petitions, writing to or calling your representatives, and getting up-to-date information about Haitian immigration.